Deep Down, a Tale of the Cornish Mines 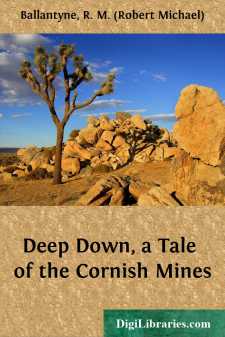 Begins the Story with a Peculiar Meeting.

Necessity is the mother of invention. This is undoubtedly true, but it is equally true that invention is not the only member of necessity’s large family. Change of scene and circumstance are also among her children. It was necessity that gave birth to the resolve to travel to the end of the earth—of English earth at all events—in search of fortune, which swelled the bosom of yonder tall, well-favoured youth, who, seated uncomfortably on the top of that clumsy public conveyance, drives up Market-Jew Street in the ancient town of Penzance. Yes, necessity—stern necessity, as she is sometimes called—drove that youth into Cornwall, and thus was the originating cause of that wonderful series of events which ultimately led to his attaining—but hold! Let us begin at the beginning.

It was a beautiful morning in June, in that period of the world’s history which is ambiguously styled “Once-upon-a-time,” when the “Kittereen”—the clumsy vehicle above referred to—rumbled up to the Star Inn and stopped there. The tall, well-favoured youth leapt at once to the ground, and entered the inn with the air of a man who owned at least the half of the county, although his much-worn grey shooting costume and single unpretentious portmanteau did not indicate either unusual wealth or exalted station.

In an off-hand hearty way, he announced to landlord, waiters, chambermaids, and hangers-on, to all, indeed, who might choose to listen, that the weather was glorious, that coaches of all kinds, especially Kittereens, were detestable machines of torture, and that he meant to perform the remainder of his journey on foot.

He inquired the way to the town of St. Just, ordered his luggage to be forwarded by coach or cart, and, with nothing but a stout oaken cudgel to encumber him, set out on his walk of about seven miles, with the determination of compensating himself for previous hours of forced inaction and constraint by ignoring roads and crossing the country like an Irish fox-hunter.

Acting on the presumptuous belief that he could find his way to any part of the world with the smallest amount of direction, he naturally missed the right road at the outset, and instead of taking the road to St. Just, pursued that which leads to the Land’s End.

The youth, as we have observed, was well-favoured. Tall, broad-shouldered, deep-chested, and athletic, with an active step, erect gait, and clear laughing eye, he was one whom a recruiting-sergeant in the Guards would have looked upon with a covetous sigh. Smooth fair cheeks and chin told that boyhood was scarce out of sight behind, and an undeniable some thing on the upper lip declared that manhood was not far in advance.

Like most people in what may be termed an uncertain stage of existence, our hero exhibited a variety of apparent contradictions. His great size and muscular strength and deep bass voice were those of a man, while the smooth skin, the soft curling hair, and the rollicking gladsome look were all indicative of the boy....