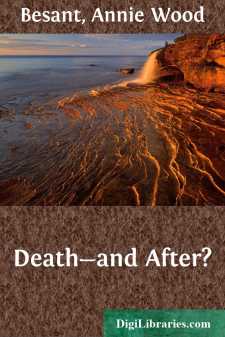 Who does not remember the story of the Christian missionary in Britain, sitting one evening in the vast hall of a Saxon king, surrounded by his thanes, having come thither to preach the gospel of his Master; and as he spoke of life and death and immortality, a bird flew in through an unglazed window, circled the hall in its flight, and flew out once more into the darkness of the night. The Christian priest bade the king see in the flight of the bird within the hall the transitory life of man, and claimed for his faith that it showed the soul, in passing from the hall of life, winging its way not into the darkness of night, but into the sunlit radiance of a more glorious world. Out of the darkness, through the open window of Birth, the life of a man comes to the earth; it dwells for a while before our eyes; into the darkness, through the open window of Death, it vanishes out of our sight. And man has questioned ever of Religion, Whence comes it? Whither goes it? and the answers have varied with the faiths. To-day, many a hundred year since Paulinus talked with Edwin, there are more people in Christendom who question whether man has a spirit to come anywhence or to go anywhither than, perhaps, in the world's history could ever before have been found at one time. And the very Christians who claim that Death's terrors have been abolished, have surrounded the bier and the tomb with more gloom and more dismal funeral pomp than have the votaries of any other creed. What can be more depressing than the darkness in which a house is kept shrouded, while the dead body is awaiting sepulture? What more repellent than the sweeping robes of lustreless crape, and the purposed hideousness of the heavy cap in which the widow laments the "deliverance" of her husband "from the burden of the flesh"? What more revolting than the artificially long faces of the undertaker's men, the drooping "weepers", the carefully-arranged white handkerchiefs, and, until lately, the pall-like funeral cloaks? During the last few years, a great and marked improvement has been made. The plumes, cloaks, and weepers have well-nigh disappeared. The grotesquely ghastly hearse is almost a thing of the past, and the coffin goes forth heaped over with flowers instead of shrouded in the heavy black velvet pall. Men and women, though still wearing black, do not roll themselves up in shapeless garments like sable winding-sheets, as if trying to see how miserable they could make themselves by the imposition of artificial discomforts. Welcome common-sense has driven custom from its throne, and has refused any longer to add these gratuitous annoyances to natural human grief.

In literature and in art, alike, this gloomy fashion of regarding Death has been characteristic of Christianity. Death has been painted as a skeleton grasping a scythe, a grinning skull, a threatening figure with terrible face and uplifted dart, a bony scarecrow shaking an hour-glass—all that could alarm and repel has been gathered round this rightly-named King of Terrors. Milton, who has done so much with his stately rhythm to mould the popular conceptions of modern Christianity, has used all the sinewy strength of his magnificent diction to surround with horror the figure of Death.

The other shape,If shape it might be called, that shape had noneDistinguishable in member, joint, or limb,Or substance might be called that shadow seemed,For each seemed either; black it stood as night,Fierce as ten furies, terrible as hell,And shook a dreadful dart; what seemed his headThe likeness of a kingly crown had on.Satan was now at hand, and from his seatThe monster moving onward came as fast,With horrid strides; hell trembled as he strode....... So spoke the grisly terror: and in shapeSo speaking, and so threatening, grew tenfoldMore dreadful and deform....... but he, my inbred enemy,Forth issued, brandishing his fatal dart,Made to destroy: I fled, and cried out Death!Hell trembled at the hideous name, and sighedFrom all her caves, and back resounded Death.

That such a view of Death should be taken by the professed followers of a Teacher said to have "brought life and immortality to light" is passing strange....