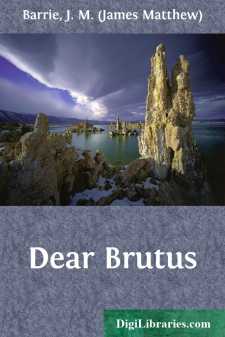 The scene is a darkened room, which the curtain reveals so stealthily that if there was a mouse on the stage it is there still. Our object is to catch our two chief characters unawares; they are Darkness and Light.

The room is so obscure as to be invisible, but at the back of the obscurity are French windows, through which is seen Lob's garden bathed in moon-shine. The Darkness and Light, which this room and garden represent, are very still, but we should feel that it is only the pause in which old enemies regard each other before they come to the grip. The moonshine stealing about among the flowers, to give them their last instructions, has left a smile upon them, but it is a smile with a menace in it for the dwellers in darkness. What we expect to see next is the moonshine slowly pushing the windows open, so that it may whisper to a confederate in the house, whose name is Lob. But though we may be sure that this was about to happen it does not happen; a stir among the dwellers in darkness prevents it.

These unsuspecting ones are in the dining-room, and as a communicating door opens we hear them at play. Several tenebrious shades appear in the lighted doorway and hesitate on the two steps that lead down into the unlit room. The fanciful among us may conceive a rustle at the same moment among the flowers. The engagement has begun, though not in the way we had intended.

They have been groping their way forward, blissfully unaware of how they shall be groping there again more terribly before the night is out. Some one finds a switch, and the room is illumined, with the effect that the garden seems to have drawn back a step as if worsted in the first encounter. But it is only waiting.

The apparently inoffensive chamber thus suddenly revealed is, for a bachelor's home, creditably like a charming country house drawing-room and abounds in the little feminine touches that are so often best applied by the hand of man. There is nothing in the room inimical to the ladies, unless it be the cut flowers which are from the garden and possibly in collusion with it. The fireplace may also be a little dubious. It has been hacked out of a thick wall which may have been there when the other walls were not, and is presumably the cavern where Lob, when alone, sits chatting to himself among the blue smoke. He is as much at home by this fire as any gnome that may be hiding among its shadows; but he is less familiar with the rest of the room, and when he sees it, as for instance on his lonely way to bed, he often stares long and hard at it before chuckling uncomfortably.

There are five ladies, and one only of them is elderly, the Mrs. Coade whom a voice in the darkness has already proclaimed the nicest. She is the nicest, though the voice was no good judge....