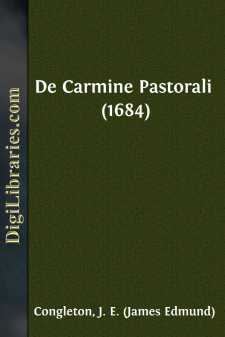 TO be as short as possible in my discourse upon the present Subject, I shall not touch upon the Excellency of Poetry in general; nor repeat those high Encomiums, (as that tis the most divine of all human Arts, and the like) which Plato in his Jone, Aristotele in his Poetica, and other Learned men have copiously insisted on: And this I do that I might more closely and briefly pursue my present design, which, no doubt will not please every man; for since I treat of that part of Poetry, which (to use Quintilian’s words,) by reason of its Clownishness, is affraid of the Court and City; some may imagine that I follow Nichocaris his humor, who would paint only the most ugly and deform’d, and those too in the meanest and most frightful dress, that real, or fancy’d Poverty could put them in.

For some think that to be a Sheapard is in it self mean, base, and sordid; And this I think is the first thing that the graver and soberer sort will be ready to object.

But if we consider how honorable that employment is, our Objectors from that Topick will be easily answer’d, for as Heroick Poems owe their dignity to the Quality of Heroes, so Pastorals to that of Sheapards.

Now to manifest this, I shall not rely on the authority of the Fabulous, and Heroick Ages, tho, in the former, a God fed Sheep in Thessaly, and in the latter, Hercules the Prince of Heroes, (as Paterculus stiles him) graz’d on mount Aventine: These Examples, tis true, are not convinceing, yet they sufficiently shew that the employment of a Sheapard was sometime look’d upon to be such, as in those Fabulous times was not alltogether unbecomeing the Dignity of a Heroe, or the Divinity of a God: which consideration if it cannot be of force enough to procure excellence, yet certainly it may secure it from the imputation of baseness, since it was sometime lookt upon as fit for the greatest in Earth or Heaven.

But not to insist on the authority of Poets, Sacred Writt tells us that Jacob and Esau, two great men, were Sheapards; And Amos, one of the Royal Family, asserts the same of himself, for He was among the Sheapards of Tecua, following that employment: The like by Gods own appointment prepared Moses for a Scepter, as Philo intimates in his life, when He tells us, that a Sheapards Art is a suitable preparation to a Kingdome; the same He mentions in the Life of Joseph, affirming that the care a Sheapard hath over his Cattle, very much resembles that which a King hath over his Subjects: The same Basil in his Homily de S. Mamm. Martyre hath concerning David, who was taken from following the Ews great with young ones to feed Israel, for He says that the Art of feeding and governing are very near akin, and even Sisters: And upon this account I suppose twas, that Kings amongst the Greeks reckoned the name of Sheapard one of their greatest titles, for, if we believe Varro, amongst the Antients, the best and bravest was still a Sheapard: Every body knows that the Romans the worthiest and greatest Nation in the World sprang from Sheapards: The Augury of the Twelve Vulturs plac’t a Scepter in Romulus’s hand which held a Crook before; and at that time, as Ovid says,

His own small Flock each Senator did keep....
Show more
Show less