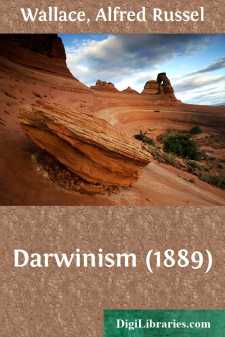 WHAT ARE "SPECIES," AND WHAT IS MEANT BY THEIR "ORIGIN"

The title of Mr. Darwin's great work is—On the Origin of Species by means of Natural Selection and the Preservation of Favoured Races in the Struggle for Life. In order to appreciate fully the aim and object of this work, and the change which it has effected not only in natural history but in many other sciences, it is necessary to form a clear conception of the meaning of the term "species," to know what was the general belief regarding them at the time when Mr. Darwin's book first appeared, and to understand what he meant, and what was generally meant, by discovering their "origin." It is for want of this preliminary knowledge that the majority of educated persons who are not naturalists are so ready to accept the innumerable objections, criticisms, and difficulties of its opponents as proofs that the Darwinian theory is unsound, while it also renders them unable to appreciate, or even to comprehend, the vast change which that theory has effected in the whole mass of thought and opinion on the great question of evolution.

The term "species" was thus defined by the celebrated botanist De Candolle: "A species is a collection of all the individuals which resemble each other more than they resemble anything else, which can by mutual fecundation produce fertile individuals, and which reproduce themselves by generation, in such a manner that we may from analogy suppose them all to have sprung from one single individual." And the zoologist Swainson gives a somewhat similar definition: "A species, in the usual acceptation of the term, is an animal which, in a state of nature, is distinguished by certain peculiarities of form, size, colour, or other circumstances, from another animal. It propagates, 'after its kind,' individuals perfectly resembling the parent; its peculiarities, therefore, are permanent."

To illustrate these definitions we will take two common English birds, the rook (Corvus frugilegus) and the crow (Corvus corone). These are distinct species, because, in the first place, they always differ from each other in certain slight peculiarities of structure, form, and habits, and, in the second place, because rooks always produce rooks, and crows produce crows, and they do not interbreed. It was therefore concluded that all the rooks in the world had descended from a single pair of rooks, and the crows in like manner from a single pair of crows, while it was considered impossible that crows could have descended from rooks or vice versâ. The "origin" of the first pair of each kind was a mystery. Similar remarks may be applied to our two common plants, the sweet violet (Viola odorata) and the dog violet (Viola canina). These also produce their like and never produce each other or intermingle, and they were therefore each supposed to have sprung from a single individual whose "origin" was unknown....