Darius the Great Makers of History 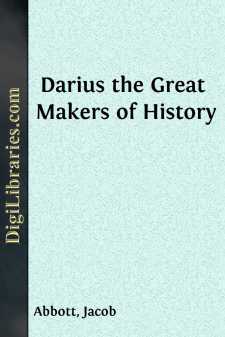 About five or six hundred years before Christ, almost the whole of the interior of Asia was united in one vast empire. The founder of this empire was Cyrus the Great. He was originally a Persian; and the whole empire is often called the Persian monarchy, taking its name from its founder's native land.

Cyrus was not contented with having annexed to his dominion all the civilized states of Asia. In the latter part of his life, he conceived the idea that there might possibly be some additional glory and power to be acquired in subduing certain half-savage regions in the north, beyond the Araxes. He accordingly raised an army, and set off on an expedition for this purpose, against a country which was governed by a barbarian queen named Tomyris. He met with a variety of adventures on this expedition, all of which are fully detailed in our history of Cyrus. There is, however, only one occurrence that it is necessary to allude to particularly here. That one relates to a remarkable dream which he had one night, just after he had crossed the river.

Cambyses and Smerdis.Hystaspes and Darius.

To explain properly the nature of this dream, it is necessary first to state that Cyrus had two sons. Their names were Cambyses and Smerdis. He had left them in Persia when he set out on his expedition across the Araxes. There was also a young man, then about twenty years of age, in one of his capitals, named Darius. He was the son of one of the nobles of Cyrus's court. His father's name was Hystaspes. Hystaspes, besides being a noble of the court, was also, as almost all nobles were in those days, an officer of the army. He accompanied Cyrus in his march into the territories of the barbarian queen, and was with him there, in camp, at the time when this narrative commences.

Cyrus, it seems, felt some misgivings in respect to the result of his enterprise; and, in order to insure the tranquillity of his empire during his absence, and the secure transmission of his power to his rightful successor in case he should never return, he established his son Cambyses as regent of his realms before he crossed the Araxes, and delivered the government of the empire, with great formality, into his hands. This took place upon the frontier, just before the army passed the river. The mind of a father, under such circumstances, would naturally be occupied, in some degree, with thoughts relating to the arrangements which his son would make, and to the difficulties he would be likely to encounter in managing the momentous concerns which had been committed to his charge. The mind of Cyrus was undoubtedly so occupied, and this, probably, was the origin of the remarkable dream.

Dream of Cyrus.His anxiety and fears.

His dream was, that Darius appeared to him in a vision, with vast wings growing from his shoulders. Darius stood, in the vision, on the confines of Europe and Asia, and his wings, expanded either way, overshadowed the whole known world....