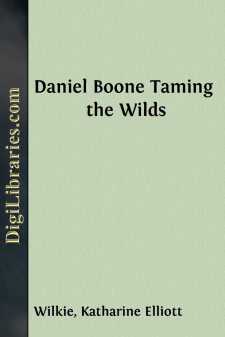 Daniel Boone was a boy who lived on the edge of the deep woods in Pennsylvania. At that time this country still belonged to England.

Friendly Indians often came out of the woods to visit the white men. Daniel liked the Indians. He liked them so well that he wished he could live with them.

One day he was taking care of his father's cattle. The pasture was several miles from the settlement. Although Daniel was a ten-year-old boy, he sometimes became lonely by himself.

Today he lay on a hillside and sang aloud. He wanted to hear a voice, even if it was only his own.

There was a low laugh behind him. Daniel sprang to his feet. A tall, slim Indian boy stood a few feet away. The white boy liked him at once.

"I sing, too," the young Indian said.

He threw back his head and sang. Daniel could not understand a word.

"I sing to the sun and the wind and the rain," the boy explained.

"I like your Indian song," Daniel said, "but I'm glad you speak English."

The boy patted the bow that hung over his right shoulder. "You like this?"

The bow was strong and shining. Daniel ran a finger along the smooth wood.

The other boy took an arrow and placed it on the bowstring. He pulled back the bow. The arrow flew away.

"You get," the Indian said.

Daniel ran after the arrow. He picked it up and looked back. The Indian boy was right beside him.

He took the arrow from Daniel. Again he shot it. Again the white boy ran after it. The young Indian ran beside him.

He shook his head when Daniel handed him the arrow.

He handed Daniel the bow.

Daniel took the bow in his hands. He pulled it back and let the arrow fly.

By now Daniel had forgotten the cattle. He had forgotten everything but the wonderful bow, his new friend, and the wide, wild woods.

After a while the boys came to a high hill. At the bottom was an Indian village. The brown-skinned boy took Daniel by the hand and ran toward the settlement.

Several dogs barked at them. Some women were hoeing their gardens. They hardly looked up as the boys passed.

An old woman was stirring something in an iron pot over a fire. It smelled good. Daniel remembered that he had eaten nothing since breakfast.

His friend stopped and pointed to Daniel and himself. The old woman nodded. With a sharp stick, she lifted a piece of meat from the pot.

The Indian boy took a broad leaf from a near-by bush. The woman dropped the hot meat on it.

Now Daniel knew what to do. He, too, found a leaf. The woman gave him some meat. Soon the hungry boys had finished their lunch.

That afternoon they swam in the clear, broad river. Then they lay on the bank in the sunshine. Daniel had never been so happy. However, he knew he must soon go home. His mother would worry if he did not return before dark.

"I must go now. I must drive the cows home," he told his Indian friend.

Daniel laughed. "It may be for the Indians, but it's not at the Boones' house. I think I'd like being an Indian....