Danger! and Other Stories 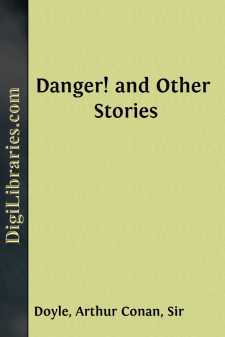 The Title story of this volume was written about eighteen months before the outbreak of the war, and was intended to direct public attention to the great danger which threatened this country.  It is a matter of history how fully this warning has been justified and how, even down to the smallest details, the prediction has been fulfilled.  The writer must, however, most thankfully admit that what he did not foresee was the energy and ingenuity with which the navy has found means to meet the new conditions.  The great silent battle which has been fought beneath the waves has ended in the repulse of an armada far more dangerous than that of Spain.

It may be objected that the writer, feeling the danger so strongly, should have taken other means than fiction to put his views before the authorities.  The answer to this criticism is that he did indeed adopt every possible method, that he personally approached leading naval men and powerful editors, that he sent three separate minutes upon the danger to various public bodies, notably to the Committee for National Defence, and that he touched upon the matter in an article in The Fortnightly Review.  In some unfortunate way subjects of national welfare are in this country continually subordinated to party politics, so that a self-evident proposition, such as the danger of a nation being fed from without, is waved aside and ignored, because it will not fit in with some general political shibboleth.  It is against this tendency that we have to guard in the future, and we have to bear in mind that the danger may recur, and that the remedies in the text (the only remedies ever proposed) have still to be adopted.  They are the sufficient encouragement of agriculture, the making of adequate Channel tunnels, and the provision of submarine merchantmen, which, on the estimate of Mr. Lake, the American designer, could be made up to 7,000 ton burden at an increased cost of about 25 per cent.  It is true that in this war the Channel tunnels would not have helped us much in the matter of food, but were France a neutral and supplies at liberty to come via Marseilles from the East, the difference would have been enormous.

Apart from food however, when one considers the transports we have needed, their convoys, the double handling of cargo, the interruptions of traffic from submarines or bad weather, the danger and suffering of the wounded, and all else that we owe to the insane opposition to the Channel tunnels, one questions whether there has ever been an example of national stupidity being so rapidly and heavily punished.  It is as clear as daylight even now, that it will take years to recover all our men and material from France, and that if the tunnel (one will suffice for the time), were at once set in hand, it might be ready to help in this task and so free shipping for the return of the Americans.  One thing however, is clear.  It is far too big and responsible and lucrative an undertaking for a private company, and it should be carried out and controlled by Government, the proceeds being used towards the war debt.

I.  DANGER! BEING THE LOG OF CAPTAIN JOHN SIRIUS

It is an amazing thing that the English, who have the reputation of being a practical nation, never saw the danger to which they were exposed.  For many years they had been spending nearly a hundred millions a year upon their army and their fleet.  Squadrons of Dreadnoughts costing two millions each had been launched.  They had spent enormous sums upon cruisers, and both their torpedo and their submarine squadrons were exceptionally strong.  They were also by no means weak in their aerial power, especially in the matter of seaplanes.  Besides all this, their army was very efficient, in spite of its limited numbers, and it was the most expensive in Europe.  Yet when the day of trial came, all this imposing force was of no use whatever, and might as well have not existed.  Their ruin could not have been more complete or more rapid if they had not possessed an ironclad or a regiment.  And all this was accomplished by me, Captain John Sirius, belonging to the navy of one of the smallest Powers in Europe, and having under my command a flotilla of eight vessels, the collective cost of which was eighteen hundred thousand pounds.  No one has a better right to tell the story than I....