Damaged Goods; the great play "Les avaries" by Brieux, novelized with the approval of the author 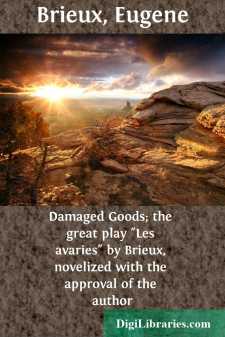 It was four o'clock in the morning when George Dupont closed the door and came down the steps to the street. The first faint streaks of dawn were in the sky, and he noticed this with annoyance, because he knew that his hair was in disarray and his whole aspect disorderly; yet he dared not take a cab, because he feared to attract attention at home. When he reached the sidewalk, he glanced about him to make sure that no one had seen him leave the house, then started down the street, his eyes upon the sidewalk before him.

George had the feeling of the morning after. There are few men in this world of abundant sin who will not know what the phrase means. The fumes of the night had evaporated; he was quite sober now, quite free from excitement. He saw what he had done, and it seemed to him something black and disgusting.

Never had a walk seemed longer than the few blocks which he had to traverse to reach his home. He must get there before the maid was up, before the baker's boy called with the rolls; otherwise, what explanation could he give?—he who had always been such a moral man, who had been pointed out by mothers as an example to their sons.

George thought of his own mother, and what she would think if she could know about his night's adventure. He thought again and again, with a pang of anguish, of Henriette. Could it be possible that a man who was engaged, whose marriage contract had actually been signed, who was soon to possess the love of a beautiful and noble girl—that such a man could have been weak enough and base enough to let himself be trapped into such a low action?

He went back over the whole series of events, shuddering at them, trying to realize how they had happened, trying to excuse himself for them. He had not intended such a culmination; he had never meant to do such a thing in his life. He had not thought of any harm when he had accepted the invitation to the supper party with his old companions from the law school. Of course, he had known that several of these chums led "fast" lives—but, then, surely a fellow could go to a friend's rooms for a lark without harm!

He remembered the girl who had sat by his side at the table. She had come with a friend who was a married woman, and so he had assumed that she was all right. George remembered how embarrassed he had been when first he had noticed her glances at him. But then the wine had begun to go to his head—he was one of those unfortunate wretches who cannot drink wine at all. He had offered to take the girl home in a cab, and on the way he had lost his head.

Oh! What a wretched thing it was. He could hardly believe that it was he who had spoken those frenzied words; and yet he must have spoken them, because he remembered them. He remembered that it had taken a long time to persuade her. He had had to promise her a ring like the one her married friend wore. Before they entered her home she had made him take off his shoes, so that the porter might not hear them. This had struck George particularly, because, even flushed with excitement as he was, he had not forgotten the warnings his father had given him as to the dangers of contact with strange women....