Daisy in the Field 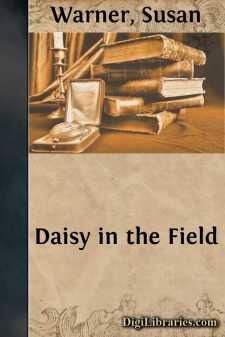 CHAPTER I. THE FIRST SMOKE OF THE BATTLEFIELD.

While Miss Cardigan went with her nephew to the door, I remained standing by the fire, which could have witnessed to so much done around it that night. I felt strong, but I remember my cheeks had an odd sensation as if the blood had left them. I did not know Miss Cardigan had come back, till I saw her standing beside me and looking at me anxiously.

"Will you go and lie down now, my lamb?"

"Yes. I want something out of some of your books. I have not done it. I will sit down and do it now."

"You're much more fit to lie down and go to sleep," said she, sorrowfully. "Let be the study, Daisy; and take some rest, while ye can."

"I shall have plenty of time," I said. "I do not want any rest, more than I shall get so."

Miss Cardigan sighed - I had heard more sighs from her that night than in all my knowledge of her before; and I sat down on the floor again, to pull out again the volumes I had put up, and begin my school work anew. As I touched them, I felt how much had come into my hands, and fallen out of my hands, since I took them up before, just a few hours ago. It would not do to think of that. I resolutely put it back, and set myself about getting out of the books the facts I wanted for my work. Miss Cardigan left the room; and for a time I turned over leaves vigorously. But the images of modern warfare began to mix themselves inconveniently with the struggles of long ago. Visions of a grey uniform came blending in dissolving views with the visions of monarchs in their robes of state and soldiers in heavy armour; it meant much, that grey uniform; and a sense of loss and want and desolation by degrees crept over me, which had nothing to do with the ruin of kingdoms. The books grew heavy; my hands trembled; yet still I tried to make good work, and bade myself deal with the present and let the past and the future alone. The "present" being represented by my school day and my studies. Could I do it? The past and the future rushed in at last, from opposite sides as it were, and my "present" was overthrown. I dropped my books and myself too, as nearly as possible; my heart gave way in a deep passion of tears.

Now I tried to reason myself out of this. What had I lost? I asked myself. What were these tears for? What had I lost, that I had not been without until only twelve hours before? Indeed rather, what had I not gained? But my reasonings were of no use. Against them all, some vision of Thorold's face, some sparkle of his eyes, some touch of his hand, would come back to me, and break down my power and unlock fresh fountains of tears. This passion of self-indulgence was not like me, and surprised myself. I suppose the reason was, I had been so long alone; I had been working my way and waiting, in exile from home as it were, so many days and years; nobody that loved me better than I loved myself had been near me for so very long; that the sweetness so suddenly given and so suddenly taken away left me a little unsteady....