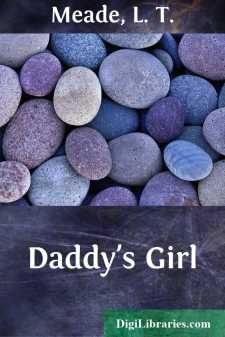 Philip Ogilvie and his pretty wife were quarrelling, as their custom was, in the drawing-room of the great house in Belgrave Square, but the Angel in the nursery upstairs knew nothing at all about that. She was eight years old, and was, at that critical moment when her father and mother were having words which might embitter all their lives, and perhaps sever them for ever, unconsciously and happily decorating herself before the nursery looking-glass.

The occasion was an important one, and the Angel’s rosebud lips were pursed up in her anxiety, and her dark, pretty brows were somewhat raised, and her very blue eyes were fixed on her own charming little reflection.

“Shall it be buttercups, or daisies, or both?” thought the Angel to herself.

A box of wild flowers, which had come up from the country that day, lay handy. There were violets and primroses, and quantities of buttercups and daisies, amongst these treasures.

“Mother likes me when I am pretty, father likes me anyhow,” she thought, and then she stood and contemplated herself, and pensively took up a bunch of daisies and held them against her small, slightly flushed cheek, and then tried the effect of the buttercups in her golden brown hair. By-and-by, she skipped away from the looking-glass, and ran up to a tall, somewhat austere lady, who was seated at a round table, writing busily.

“What do you want, Sibyl? Don’t disturb me now,” said this individual.

“It is only just for a moment,” replied the Angel, knitting her brows, and standing in such a position that she excluded all light from falling on the severe-looking lady’s writing-pad.

“Which is the prettiest, buttercups or daisies, or the two twisted up together?” she said.

“Oh, don’t worry me, child, I want to catch this post. My brother is very ill, and he’ll be so annoyed if he doesn’t hear from me. Did you say buttercups and daisies mixed? Yes, of course, mix them, that is the old nursery rhyme.”

The little Sibyl stamped a small foot encased in a red shoe with an impatient movement, and turned once more to contemplate herself in the glass. Miss Winstead, the governess, resumed her letter, and a clock on the mantelpiece struck out seven silvery chimes.

“They’ll be going in to dinner; I must be very quick indeed,” thought the child. She began to pull out the flowers, to arrange them in little groups, and presently, by the aid of numerous pins, to deck her small person.

“Mother likes me when I am pretty,” she repeated softly under her breath, “but father likes me anyhow.” She thought over this somewhat curious problem. Why should father like her anyhow? Why should mother only kiss her and pet her when she was downright pretty?

“Do I look pretty?” she said at last, dancing back to the governess’s side.

Miss Winstead dropped her pen and looked up at the radiant little figure. She had contrived to tie some of the wild flowers together, and had encircled them round her white forehead, and mixed them in her flowing locks, and here, there, and everywhere on her white dress were bunches of buttercups and daisies, with a few violets thrown in.

“You are a very vain little girl,” said Miss Winstead. “I won’t tell you whether you look pretty or not, you ought not to think of your looks. God does not like people who think whether they are pretty or not. He likes humble-minded little girls. Now don’t interrupt me any more.”

“There’s the gong, I’m off,” cried Sibyl. She kissed her hand to Miss Winstead, her face all alight with happiness.

“I know I am pretty, she always talks like that when I am,” thought the child, who had a very keen insight into character. “Mother will kiss me to-night, I am so glad. I wonder if Jesus Christ thinks me pretty, too.”

Sibyl Ogilvie, aged eight, had a theology of her own....