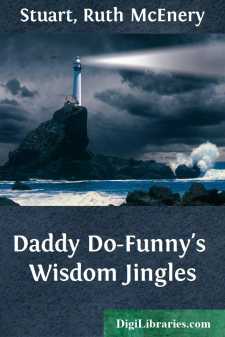 In presenting a loyal and venerable ex-slave as an artless exponent of freedom, freedom of conduct as well as of speech, the author of this trivial volume is perhaps not composing an individual so truly as individualizing a composite, if the expression will pass.

The grizzled brown dispenser of homely admonitions is a figure not unfamiliar to those who have "moved in plantation circles" in the cotton and sugar country, and touched hands with the kindly dark survivors of the old regime.

If the man, Daddy Do-funny, was unique as an individual, perhaps in the very fact of an individuality unembarrassed by the limitations of convention, of education and of precedent, he becomes in a sense typical of his people and of his time.

Of course, a man is not called Do-funny for nothing, not even playfully and in the free vernacular of rusticity at its freest.

One of a small community of superannuated pensioners upon the bounty of their former owners, Daddy was easily first citizen of Evergreen annex on Crepe Myrtle plantation, which is to say he was therein a personage of place and of privilege, coming and going at will, doing as he pleased, and as, with uplifted eye, he reverently boasted, "sponsible to nobody but Almighty Gord for manners and behavior."

Even so late as this year of grace, a full half century after "emancipation," there are still to be found on many of the larger plantations in the far South a few such members of the order of the Rocking-chair, whose records of "good and honorable service" reach back through periods of bondage, even such kindergartners as septuagenarians in the privileged class, having clear title to nearly a quarter of a century of slave memories; not to mention the occasional centenarian with even his semi-occasional uncle or father poking around, toothless and white-plumed dignitaries, these, sometimes with leaders, being blind, but ever important in pride of association and memory.

It is something even if one is bent double and may never again behold the light of day, to be able to reach back into a dim and forgotten past and to say, "I remember," especially when the memory recalls days of brilliance and of importance.

But Daddy's place among the gentle Knights and Ladies of the Rocking-chair was far and away above such as these whose thoughts, alert though they were and loyal, travelled forever backward to the sweet but worn fields of memory where every pleasure is a recognition and fashions do not change—a restful retreat for dreamers whose days of activity are done.

But Daddy's mind worked forward and upward and although he did not know the alphabet excepting by rote, a common ante-bellum plantation accomplishment, and while professing high contempt for what he called "cold shelf-knowledge," his reputation for wisdom, wisdom as gleaned in observation and experience and "ripened by insight," was supreme, while his way of casually tossing it off in bits in playful epigram finally gave the word its plural form so that the expression "Do-Funny Wisdoms" came into familiar use....