Cyrus the Great Makers of History 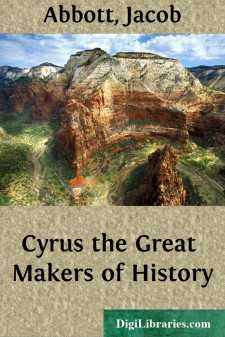 Cyrus was the founder of the ancient Persian empire—a monarchy, perhaps, the most wealthy and magnificent which the world has ever seen. Of that strange and incomprehensible principle of human nature, under the influence of which vast masses of men, notwithstanding the universal instinct of aversion to control, combine, under certain circumstances, by millions and millions, to maintain, for many successive centuries, the representatives of some one great family in a condition of exalted, and absolute, and utterly irresponsible ascendency over themselves, while they toil for them, watch over them, submit to endless and most humiliating privations in their behalf, and commit, if commanded to do so, the most inexcusable and atrocious crimes to sustain the demigods they have thus made in their lofty estate, we have, in the case of this Persian monarchy, one of the most extraordinary exhibitions.

Grandeur of the Persian monarchy.Its origin.

The Persian monarchy appears, in fact, even as we look back upon it from this remote distance both of space and of time, as a very vast wave of human power and grandeur. It swelled up among the populations of Asia, between the Persian Gulf and the Caspian Sea, about five hundred years before Christ, and rolled on in undiminished magnitude and glory for many centuries. It bore upon its crest the royal line of Astyages and his successors. Cyrus was, however, the first of the princes whom it held up conspicuously to the admiration of the world and he rode so gracefully and gallantly on the lofty crest that mankind have given him the credit of raising and sustaining the magnificent billow on which he was borne. How far we are to consider him as founding the monarchy, or the monarchy as raising and illustrating him, will appear more fully in the course of this narrative.

The republics of Greece.Written characters Greek and Persian.Preservation of the Greek language.

Cotemporaneous with this Persian monarchy in the East, there flourished in the West the small but very efficient and vigorous republics of Greece. The Greeks had a written character for their language which could be easily and rapidly executed, while the ordinary language of the Persians was scarcely written at all. There was, it is true, in this latter nation, a certain learned character, which was used by the priests for their mystic records, and also for certain sacred books which constituted the only national archives. It was, however, only slowly and with difficulty that this character could be penned, and, when penned, it was unintelligible to the great mass of the population. For this reason, among others, the Greeks wrote narratives of the great events which occurred in their day, which narratives they so embellished and adorned by the picturesque lights and shades in which their genius enabled them to present the scenes and characters described as to make them universally admired, while the surrounding nations produced nothing but formal governmental records, not worth to the community at large the toil and labor necessary to decipher them and make them intelligible....