by American School of Correspondence 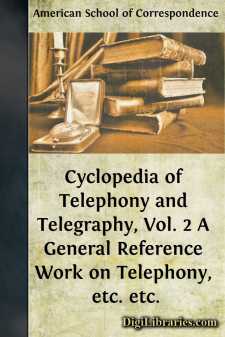 Advantages of Common-Battery Operation. The advantages of the common-battery system of operation, alluded to in Chapter XIII, may be briefly summarized here. The main gain in the common-battery system of supply is the simplification of the subscribers' instruments, doing away with the local batteries and the magneto generators, and the concentration of all these many sources of current into one single source at the central office. A considerable saving is thus effected from the standpoint of maintenance, since the simpler common-battery instrument is not so likely to get out of order and, therefore, does not have to be visited so often for repairs, and the absence of local batteries, of course, makes the renewal of the battery parts by members of the maintenance department, unnecessary. Another decided advantage in the common-battery system is the fact that the centralized battery stands ready always to send current over the line when the subscriber completes the circuit of the line at his station by removing his receiver from its hook. The common-battery system, therefore, lends itself naturally to the purposes of automatic signaling, since it is only necessary to place at the central office a device in the circuit of each line that will be responsive to the current which flows from the central battery when the subscriber removes his receiver from its hook. It is thus that the subscriber is enabled automatically to signal the central office when he desires a connection; and as will be shown, it is by the same sort of means, associated with the cord circuits used in connecting his line with some other line, that the operator is automatically notified when a disconnection is desired, the cessation of current through the subscriber's line when he hangs up his receiver being made to actuate certain responsive devices which are associated with the cord at that time connected with his line, and which convey the proper disconnect signal to the operator.

Concentration of sources of energy into a single large unit, the simplification of the subscriber's station equipment, and the ready adaptability to automatic signaling from the subscriber to the central office are, therefore, the reasons for the existence of the common-battery system.