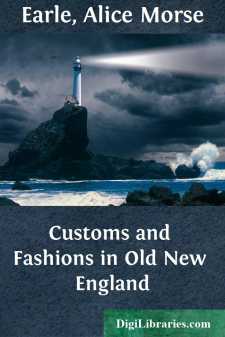 From the hour when the Puritan baby opened his eyes in bleak New England he had a Spartan struggle for life. In summer-time he fared comparatively well, but in winter the ill-heated houses of the colonists gave to him a most chilling and benumbing welcome. Within the great open fireplace, when fairly scorched in the face by the glowing flames of the roaring wood fire, he might be bathed and dressed, and he might be cuddled and nursed in warmth and comfort; but all his baby hours could not be spent in the ingleside, and were he carried four feet away from the chimney on a raw winter's day he found in his new home a temperature that would make a modern infant scream with indignant discomfort, or lie stupefied with cold.

Nor was he permitted even in the first dismal days of his life to stay peacefully within-doors. On the Sunday following his birth he was carried to the meeting-house to be baptized. When we consider the chill and gloom of those unheated, freezing churches, growing colder and damper and deadlier with every wintry blast—we wonder that grown persons even could bear the exposure. Still more do we marvel that tender babes ever lived through their cruel winter christenings when it is recorded that the ice had to be broken in the christening bowl. In villages and towns where the houses were all clustered around the meeting-house the baby Puritans did not have to be carried far to be baptized; but in country parishes, where the dwelling-houses were widely scattered, it might be truthfully recorded of many a chrisom-child: "Died of being baptized." One cruel parson believed in and practised infant immersion, fairly a Puritan torture, until his own child nearly lost its life thereby.

Dressed in fine linen and wrapped in a hand-woven christening blanket—a "bearing-cloth"—the unfortunate young Puritan was carried to church in the arms of the midwife, who was a person of vast importance and dignity as well as of service in early colonial days, when families of from fifteen to twenty children were quite the common quota. At the altar the baby was placed in his proud father's arms, and received his first cold and disheartening reception into the Puritan Church. In the pages of Judge Samuel Sewall's diary, to which alone we can turn for any definite or extended contemporary picture of colonial life in Puritan New England, as for knowledge of England of that date we turn to the diaries of Evelyn and Pepys, we find abundant proof that inclemency of weather was little heeded when religious customs and duties were in question. On January 22d, 1694, Judge Sewall thus records:

"A very extraordinary Storm by reason of the falling and driving of the Snow. Few women could get to Meeting. A child named Alexander was baptized in the afternoon."

He does not record Alexander's death in sequence. He writes thus of the baptism of a four days' old child of his own on February 6th, 1656:

"Between 3 & 4 P.M. Mr. Willard baptizeth my Son whom I named Stephen. Day was louring after the storm but not freezing....