Cupid's Almanac and Guide to Hearticulture for This Year and Next 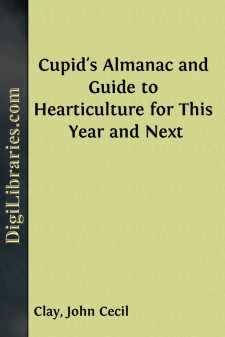 One cannot begin too early, and January is the time for looking over the ground and planning the arrangement of the Heart Garden.

Outside of the Hothouse few flowers are to be seen in January. The most noticeable of these is the Common Turnleaf or Resolution Plant, a sort of Neverlasting Flower. The Turnleaf abounds during the early days of January, but disappears as the month progresses.

It is a showy plant, with its curiously marked leaves, but is seldom known to blossom. The Flower, which is said to be of the purest white, with an odor somewhat resembling Sanctity, is entirely concealed by the leaves, which begin to turn as soon as the plant is full-grown.

When the new leaves have completely turned over, the flower will be seen in all its snowy beauty. This, however, rarely happens, as most of the plants die long before the turning process is accomplished.

Another winter-blooming flower is the Valentine Plant (Lovelornia Desperatia), one of the Epistolaria Family. This should be set out towards the end of the month, as it flowers in the middle of February.

NOTE. Recent investigations have shown that this destructive Blight, of which the Turnleaf is the victim, is caused by a deadly germ known as Jus Twunsmoria.

Shy. Blooms in out-of-the-way corners and on dressing-tables.

An uncertain plant. Don't try to raise them unless you have had experience.

The Valentine Plants are now fully grown, but the flowers do not appear until the middle of the month, when they are ready to be packed, and sent by the male to all parts of the world.

The Valentine Plants are very sensitive to environment and temperature, and occasionally produce a flower, remarkably like that of the Poppia or Proposal Plant, to which it is said by some to be allied.

There is another variety of the Valentine Plant, much dreaded by Hearticulturists, and unfortunately only too common, known as Valentina Vulgaria. In well-kept gardens it is regarded as a weed and destroyed whenever it appears. The flower is gaudy in color and emits a most offensive odor. A powerful irritant to all the senses, it is to some people quite poisonous, though rarely fatal in its effects.

The Social Climber (Aspira Socialis) or Push Vine, which blooms in the most inclement weather and in the most Uninviting Places, is often seen during this month. By fastidious gardeners it is considered an undesirable visitor, and though impossible to exclude it altogether, if kept well in check during the winter it will be less troublesome in the summer months. The Push Vine is the toughest of all the Aspiration Vines, and under favorable circumstances attains a great height.

Blooms only one day in the year, but if the blossoms are tenderly kept they will retain their sweetness for a long time.