Culm Rock The Story of a Year: What it Brought and What it Taught 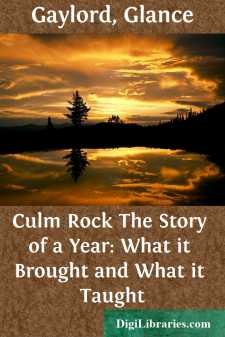 ulm rock was a wild place. You might search the coast for miles and not find another bit of nature so bare and rent and ragged as this. So fiercely had the storms driven over it, so wildly had the wind and waves beat, that the few cedars which once flourished as its only bit of greenness were long ago dead, and now held up only bleached and ragged hands. Jutting out into the sea, the surf rolled and thundered along its jagged shore of rock and sand, and was never silent. It would have been an island but for the narrow strips of sand, heaped high and ridgelike, which bound it to the main land; and this slender bridge, it often seemed, would be torn away by the ravenous sea which gnawed and engulfed great tracts at once, and yet heaped it higher and broader in the next storm. Beyond, on the firm and unyielding land, the pine woods stood up, vast, dim, and silent, stretching away into the interior. So, with the great dark barrier of forest behind and the waste of shining sea in front, Culm Rock seemed shut out from all the rest of the world. True, sails flitted along the horizon, and the smoke of foreign-bound steamers trailed against the sky, giving token of the great world's life and stir; and there were Skipper Ben and the "White Gull" who touched at the little wharf at Culm every week; but for these, the people—for there were people who dwelt here—might have lived in another sphere for aught they knew or were conscious of what was transpiring in the wonderful land which lay beyond the stretch of sea, and between which and themselves the "White Gull" was the only means of communication.

Do you wonder that people could spend their lives here, die, and never have seen the world without? There were only a dozen houses,—poor, racked, weather-beaten things, nestled on a bit of sand on a far corner of Culm,—inhabited by fishermen and their families. They were rough, hardy folk, but ignorant, and with only ambition enough to get their living out of the great sea, and a poor and scanty enough living at that. Skipper Ben brought them molasses and calicoes down in the "White Gull," and took their fish in exchange; and if he told them a bit of news from the great city and the greater world, it was all very well. If he failed to do this, it was all very well too.

Back of the fisher huts, the rocks rose high and dark, and quite hid the pine woods and the isthmus of yellow sand, and everything that could make Culm at all cheery or pleasant. This eminence was Wind Cliff, and served as a landmark for all the sailors whose path lay along the coast. Around this the gulls were alway flitting and screaming, and their nests were everywhere in the crevices of the rocks. Bald and gray it rose, scarred and rent with storms and age, and so steep as to be almost inaccessible. It fronted the north-west, and from its sharp tip the rock sloped south to the sea, and held in one of its great hollows down by the shore a house—such a house as you would not have looked for at Culm—with walls of stone and tall, ancient chimneys and deep-set windows, like eyes looking forever at the sea....