Crown and Anchor Under the Pen'ant 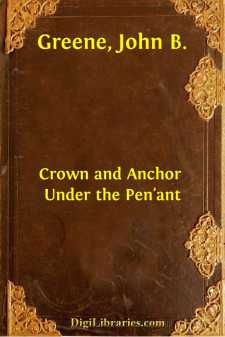 “Hullo, Dad!” I cried out, stopping abruptly in front of the red granite coloured Reform Club, down the marble steps of which a queer-looking old gentleman was slowly descending. “Who is that funny old fellow there? He’s just like that ‘old clo’’ man we saw at the corner of the street this morning, only that he hasn’t got three hats on, one on top of another, the same as the other chap had!”

We were walking along Pall Mall on our way from Piccadilly to Whitehall, where my father intended calling in at the Admiralty to put in a sort of official appearance on his return to England after a long period of foreign service; and Dad was taking advantage of the opportunity to show me a few of the sights of London that came within our ken, everything being strange to me, for I had never set foot in the metropolis before the previous evening, when mother and I had come up by a late train from the little Hampshire village where we lived, to meet father on his arrival and welcome him home.

Under these circumstances, therefore, as might reasonably have been expected, our halts had been already frequent and oft to satisfy the cravings of my wondering fancy; and Dad must have been tired of answering my innumerable questions and inquiries ere half our journey had been accomplished.

He was very good-tempered and obliging, however, and bore with me patiently, giving me all the information in his power concerning the various persons and objects that attracted my attention, and never “turning nasty” at my insatiable curiosity.

So now, as heretofore, obedient to my bidding, he turned to look in the direction to which I pointed.

“Where’s your friend, the funny old fellow you spoke of, my boy?” he said kindly, though half-quizzingly. “I don’t see him, Jack.”

“Why, there he is, right opposite to us, Dad!” I exclaimed. “He’s coming down the steps from that doorway there, and is quite close to us now!”

“Oh! that’s your friend, Jack, eh?” said father, glancing in his turn at the old gentleman who had caught my eye. “Let me see if I can make him out for you.”

The old fellow was not one whom an ordinary observer would style a grand personage, or think worthy of notice in any way, very probably; and yet, there was something about him which irresistibly attracted my attention making me wonder who he was and want to know all about him. Boy though I was, and new to London and London life, I was certain, I’m sure I can’t tell why, that he must be “somebody.”

A short broad-shouldered man was he, with iron-grey hair, and a very prominent nose that was too strongly curved to be called aquiline, and which, with his angular face, equally tanned to a brick-dust hue from exposure to wind and weather, gave him a sort of eagle-like look, an impression that was supported by his erect bearing and air of command; albeit, sixty odd years or more must have rolled over his head, and his great width of chest, as he moved downwards throwing out his long arms, made his thick-set figure seem stumpier than it actually was, though, like most sailors of the old school, there was no denying the fact, as Dad said subsequently, that he was “broad in the beam and Dutch built over all!”

Nature had, undoubtedly, done much for the old gentleman, but art little, so far as his personal appearance was concerned; for nothing could have been more quaint and out of keeping with Pall Mall and its fashionable surroundings than his eccentric costume....