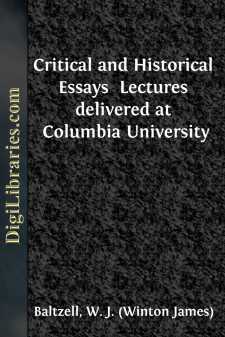 Darwin's theory that music had its origin “in the sounds made by the half-human progenitors of man during the season of courtship” seems for many reasons to be inadequate and untenable. A much more plausible explanation, it seems to me, is to be found in the theory of Theophrastus, in which the origin of music is attributed to the whole range of human emotion.

When an animal utters a cry of joy or pain it expresses its emotions in more or less definite tones; and at some remote period of the earth's history all primeval mankind must have expressed its emotions in much the same manner. When this inarticulate speech developed into the use of certain sounds as symbols for emotions—emotions that otherwise would have been expressed by the natural sounds occasioned by them—then we have the beginnings of speech as distinguished from music, which is still the universal language. In other words, intellectual development begins with articulate speech, leaving music for the expression of the emotions.

To symbolize the sounds used to express emotion, if I may so put it, is to weaken that expression, and it would naturally be the strongest emotion that would first feel the inadequacy of the new-found speech. Now what is mankind's strongest emotion? Even in the nineteenth century Goethe could say, “'Tis fear that constitutes the god-like in man.” Certainly before the Christian era the soul of mankind had its roots in fear. In our superstition we were like children beneath a great tree of which the upper part was as a vague and fascinating mystery, but the roots holding it firmly to the ground were tangible, palpable facts. We feared—we knew not what. Love was human, all the other emotions were human; fear alone was indefinable.

The primeval savage, looking at the world subjectively, was merely part of it. He might love, hate, threaten, kill, if he willed; every other creature could do the same. But the wind was a great spirit to him; lightning and thunder threatened him as they did the rest of the world; the flood would destroy him as ruthlessly as it tore the trees asunder. The elements were animate powers that had nothing in common with him; for what the intellect cannot explain the imagination magnifies.

Fear, then, was the strongest emotion. Therefore auxiliary aids to express and cause fear were necessary when the speech symbols for fear, drifting further and further away from expressing the actual thing, became words, and words were inadequate to express and cause fear. In that vague groping for sound symbols which would cause and express fear far better than mere words, we have the beginning of what is gradually to develop into music.

We all know that savage nations accompany their dances by striking one object with another, sometimes by a clanking of stones, the pounding of wood, or perhaps the clashing of stone spearheads against wooden shields (a custom which extended until the time when shields and spears were discarded), meaning thus to express something that words cannot. This meaning changed naturally from its original one of being the simple expression of fear to that of welcoming a chieftain; and, if one wishes to push the theory to excess, we may still see a shadowy reminiscence of it in the manner in which the violinists of an orchestra applaud an honoured guest—perchance some famous virtuoso—at one of our symphony concerts by striking the backs of their violins with their bows.

To go back to the savages. While this clashing of one object against another could not be called the beginning of music, and while it could not be said to originate a musical instrument, it did, nevertheless, bring into existence music's greatest prop, rhythm, an ally without which music would seem to be impossible. It is hardly necessary to go into this point in detail. Suffice it to say that the sense of rhythm is highly developed even among those savage tribes which stand the lowest in the scale of civilization to-day, for instance, the Andaman Islanders, of whom I shall speak later; the same may be said of the Tierra del Fuegians and the now extinct aborigines of Tasmania; it is the same with the Semangs of the Malay Peninsula, the Ajitas of the Philippines, and the savages inhabiting the interior of Borneo....