Crime: Its Cause and Treatment 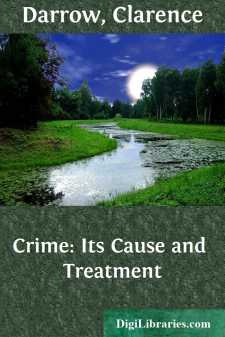 I WHAT IS CRIME?

There can be no sane discussion of "crime" and "criminals" without an investigation of the meaning of the words. A large majority of men, even among the educated, speak of a "criminal" as if the word had a clearly defined meaning and as if men were divided by a plain and distinct line into the criminal and the virtuous. As a matter of fact, there is no such division, and from the nature of things, there never can be such a line.

Strictly speaking, a crime is an act forbidden by the law of the land, and one which is considered sufficiently serious to warrant providing penalties for its commission. It does not necessarily follow that this act is either good or bad; the punishment follows for the violation of the law and not necessarily for any moral transgression. No doubt most of the things forbidden by the penal code are such as are injurious to the organized society of the time and place, and are usually of such a character as for a long period of time, and in most countries, have been classed as criminal. But even then it does not always follow that the violator of the law is not a person of higher type than the majority who are directly and indirectly responsible for the law.

It is apparent that a thing is not necessarily bad because it is forbidden by the law. Legislators are forever repealing and abolishing criminal statutes, and organized society is constantly ignoring laws, until they fall into disuse and die. The laws against witchcraft, the long line of "blue laws," the laws affecting religious beliefs and many social customs, are well-known examples of legal and innocent acts which legislatures and courts have once made criminal. Not only are criminal statutes always dying by repeal or repeated violation, but every time a legislature meets, it changes penalties for existing crimes and makes criminal certain acts that were not forbidden before.

Judging from the kind of men sent to the State legislatures and to Congress, the fact that certain things are forbidden does not mean that these things are necessarily evil; but rather, that politicians believe there is a demand for such legislation from the class of society that is most powerful in political action. No one who examines the question can be satisfied that a thing is intrinsically wrong because it is forbidden by a legislative body.

Other more or less popular opinions of the way to determine right or wrong are found to be no more satisfactory. Many believe that the question of whether an act is right or wrong is to be settled by a religious doctrine; but the difficulties are still greater in this direction. First of all, this involves a thorough and judicial inquiry into the merits of many, if not all, forms of religion, an investigation which has never been made, and from the nature of things cannot be made. The fact is, that one's religious opinions are settled long before he begins to investigate and quite by other processes than reason. Then, too, all religious precepts rest on interpretation, and even the things that seem the plainest have ever been subject to manifold and sometimes conflicting construction....