Crime and Its Causes 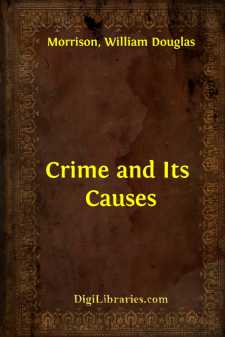 THE STATISTICS OF CRIME.

It is only within the present century, and in some countries it is only within the present generation, that the possibility has arisen of conducting the study of criminal problems on anything approaching an exact and scientific basis. Before the introduction of a system of criminal statistics—a step taken by most peoples within the memory of men still living—it was impossible for civilised communities to ascertain with absolute accuracy whether crime was increasing or decreasing, or what transformation it was passing through in consequence of the social, political, and economic changes constantly taking place in all highly organised societies. It was also equally impossible to appreciate the effect of punishment for good or evil on the criminal population. Justice had little or no data to go upon; prisoners were sentenced in batches to the gallows, to transportation, to the hulks, or to the county gaol, but no inquiry was made as to the result of these punishments on the criminal classes or on the progress of crime. It was deemed sufficient to catch and punish the offender; the more offences seemed to increase—there was no sure method of knowing whether they did increase or not—the more severe the punishment became. Justice worked in the dark, and was surrounded by the terrors of darkness. What followed is easy to imagine; the criminal law of England reached a pitch of unparalleled barbarity, and within living memory laws were on the statute book by which a man might be hanged for stealing property above the value of a shilling.

Had a fairly accurate system of criminal statistics existed, it is very likely that the data contained in them would have reassured the nation and tempered the severity of the law.

Of Criminal Statistics it may be said in the first place, that they act as an annual register for tabulating the amount of danger to which society is exposed by the nefarious operations of lawless persons. By these statistics we are informed of the number of crimes committed during the course of the year so far as they are reported to the police. We are informed of the number of persons brought to trial for the perpetration of these crimes; of the nature of the offences with which incriminated persons are charged, and of the length of sentence imposed on those who are sent to prison. The age, the degree of instruction, and the occupations of prisoners are also tabulated. A record is also kept of the number of times a man has been committed to prison, and of the manner in which he has conducted himself while in confinement.

One important point must be mentioned on which criminal statistics are almost entirely silent. The great sources of crime are the personal, the social, and the economic conditions of the individuals who commit it. Criminal statistics, to be exhaustive, ought to include not only the amount of crime and the degrees of punishment awarded to offenders; these statistics should also, as far as practicable, take cognisance of the sources from which crime undoubtedly springs....