Cricket at the Seashore 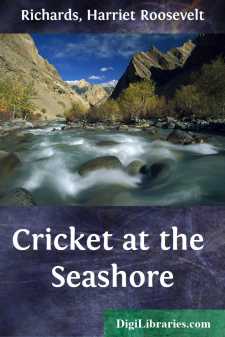 The summer at Marbury had begun. On the 20th of June, after seeing the Europe-bound party off for New York, the Ward children had arrived, bag and baggage, under Auntie Jean's escort.

Early the first morning after their arrival, Cricket awoke Eunice with a punch.

"Oh, you're such a lazybones," sighed Cricket, whose light, active frame required less sleep than Eunice's heavier build. "It's six o'clock, for the clock just struck. Now I'll tell you what I want to do. Let's dig in the sand-banks every day, and see if we can't find mamma's money-bag, that she and auntie buried there so long ago."

"All right, and let's search in the cove for the little turquoise ring you lost two years ago, in bathing," answered Eunice, still sleepily, but with much sarcasm.

"Now, Eunice, you needn't come out with any of your sarcastic sinuates," said Cricket, tossing her curly head. "I'm going to do it anyway, and I'm going to find it. I feel it in my bones, as 'Liza says, and I'm going to begin straight after breakfast, if we don't do anything else. Don't tell any one, for I want to surprise everybody."

"I think you're safe to do it, if you want to. I won't tell. Wonder if they've sailed yet," with a thought of the travellers.

"The steamer doesn't sail till eleven; don't you remember? Prob'ly they're just getting up. Come, Eunice, get up. I hear the boys, now."

Cricket scrambled out of bed and ran to the window to peep out.

"There they go now for their swim. Boys! Boys! wait for me!" and Cricket dropped into her bathing-suit, which had been put out all ready the night before, and flew down-stairs to join the boys in their morning plunge in the sea, her bare arms gleaming from the dark-blue of her suit, and bathing-shoes protecting her feet from the sharp stones in the rough lane that led to the cove.

They had a glorious swim. At least, Will and Archie swam, and Cricket splashed under their directions. She had almost learned to swim the last time that she had been at Marbury in the summer-time, two years before, and she could already float nicely and go "dog-paddle," but she had great difficulty in making any headway in swimming.

"There!" she sputtered, in triumph, at last, clinging hold of the swimming-raft; "I almost got away from the place where I was, then." She turned over on her back to rest herself, and float for a moment, then prepared for another start.

"I don't seem to wiggle my feet right. I get so destracted thinking of my hands, that I always forget to kick. I can't keep my mind in two places at once."

"Now try again," said Will, good-naturedly. "See here. Draw up your feet as you bring your hands together and kick hard, when you throw them out. Go just like a frog. That's fine. Now again. Draw up, kick out, draw up, kick out—fine!" and Cricket, sputtering and laughing, drew herself up on the swimming-raft, having really swum two feet....