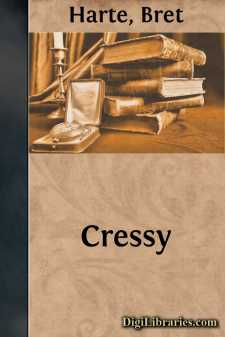 As the master of the Indian Spring school emerged from the pine woods into the little clearing before the schoolhouse, he stopped whistling, put his hat less jauntily on his head, threw away some wild flowers he had gathered on his way, and otherwise assumed the severe demeanor of his profession and his mature age—which was at least twenty. Not that he usually felt this an assumption; it was a firm conviction of his serious nature that he impressed others, as he did himself, with the blended austerity and ennui of deep and exhausted experience.

The building which was assigned to him and his flock by the Board of Education of Tuolumne County, California, had been originally a church. It still bore a faded odor of sanctity, mingled, however, with a later and slightly alcoholic breath of political discussion, the result of its weekly occupation under the authority of the Board as a Tribune for the enunciation of party principles and devotion to the Liberties of the People. There were a few dog-eared hymn-books on the teacher's desk, and the blackboard but imperfectly hid an impassioned appeal to the citizens of Indian Spring to "Rally" for Stebbins as Supervisor. The master had been struck with the size of the black type in which this placard was printed, and with a shrewd perception of its value to the round wandering eyes of his smaller pupils, allowed it to remain as a pleasing example of orthography. Unfortunately, although subdivided and spelt by them in its separate letters with painful and perfect accuracy, it was collectively known as "Wally," and its general import productive of vague hilarity.

Taking a large key from his pocket, the master unlocked the door and threw it open, stepping back with a certain precaution begotten of his experience in once finding a small but sociable rattlesnake coiled up near the threshold. A slight disturbance which followed his intrusion showed the value of that precaution, and the fact that the room had been already used for various private and peaceful gatherings of animated nature. An irregular attendance of yellow-birds and squirrels dismissed themselves hurriedly through the broken floor and windows, but a golden lizard, stiffened suddenly into stony fright on the edge of an open arithmetic, touched the heart of the master so strongly by its resemblance to some kept-in and forgotten scholar who had succumbed over the task he could not accomplish, that he was seized with compunction.

Recovering himself, and re-establishing, as it were, the decorous discipline of the room by clapping his hands and saying "Sho!" he passed up the narrow aisle of benches, replacing the forgotten arithmetic, and picking up from the desks here and there certain fragmentary pieces of plaster and crumbling wood that had fallen from the ceiling, as if this grove of Academus had been shedding its leaves overnight. When he reached his own desk he lifted the lid and remained for some moments motionless, gazing into it. His apparent meditation however was simply the combined reflection of his own features in a small pocket-mirror in its recesses and a perplexing doubt in his mind whether the sacrifice of his budding moustache was not essential to the professional austerity of his countenance....