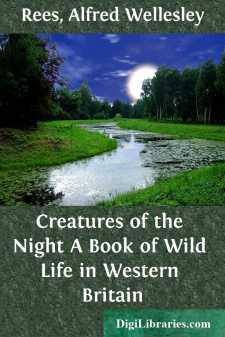 THE HOLT AMONG THE ALDERS.

I first saw Lutra, the otter-cub, while I was fishing late one summer night. Slow-moving clouds, breaking into fantastic shapes and spreading out great, threatening arms into the dark, ascended from the horizon and sailed northward under the moon and stars. Ever and anon, low down in the sky, Venus, like a clear-cut diamond suspended from one of its many twinkling points, glittered between the fringes of the clouds, or the white moon diffused soft light among the wreathing vapours that twisted and rolled athwart the heavens. In the shelter of the pines on the margin of the river, a ringdove, awakened by a bickering mate, fluttered from bough to bough; and his angry, muffled coo of defiance marred the stillness of the night. The gurgling call of a moorhen, mingling with the ripple of the stream over the ford, came from the reeds at a distant bend of the river. Nearer, the river, with varying cadence, rose and fell in uneven current over a rocky shelf, and then came on to murmur around me while I waded towards the edge of a deep, forbidding pool. In the smooth back-wash beyond the black cup of the pool a mass of gathered foam gleamed weirdly in the dark; and, further away, broad tangles of river-weed, dotted with the pale petals of countless flowers, floated on the shallow trout-reach extending from the village gardens to the cornfields below the old, grey church.

In one of the terraced gardens behind me a cottager was burning garden refuse; tongues of flame leaped up amid billows of smoke, and from the crackling heap a myriad sparks shot out on every side. While the cottager moved about by the fire, his shadow lengthened across the river, which, reflecting the lurid glare, became strangely suggestive of unfathomable depths. The moorhen called again from the reeds near the ford, then flew away over the fire-flushed river and disappeared into the gloom; and a water-vole dropped with a gentle plash into the pool.

Casting a white moth quietly over the stream, I noticed beyond the shadows a round mass rising from the centre of the current, moving against the flood, and sinking noiselessly out of sight. There could be no doubt that the shape and motion were those of an otter. To continue my sport would have been in vain with such a master-fisher in the pool, so I reeled in my line, and stood still among the ripples as they circled, muttering, around my knees. Presently the dim form of the otter reappeared a little further up-stream, and I caught sight of a glistening trout in the creature's mouth.

The otter swam, with head just above water, towards the alders skirting the opposite bank, and then, turning sharply, was lost to sight near the overhanging roots of a sycamore. Immediately afterwards, a strange, flute-like whistle—as if some animal, having ascended from the depths of the river, had blown water through its nostrils in a violent effort to breathe—came from the whirlpool in the dense shadows of the pines: the otter's mate was hunting in the quiet water beyond the shelf of rock....