Creating Capital Money-making as an aim in business 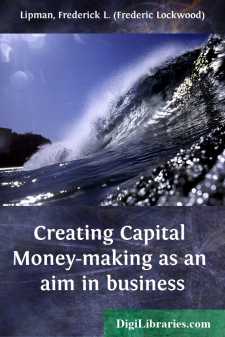 CREATING CAPITAL MONEY-MAKING AS AN AIM IN BUSINESS

The object of this paper is to discuss money-making; to examine its prevalence as an aim among people generally and the moral standards which obtain among those who consciously seek to make money.

The desire to make money is common to most men. Stronger or weaker, in some degree it is present in the mind of nearly every one. Now, how far does this desire grow to be an aim or object in our lives, and to what extent is such an aim a worthy one?

The typical money-maker as commonly pictured in our imagination is a narrow, grasping, selfish individual who has chosen to follow lower rather than higher ideals and who often is tempted, and always may be tempted, to employ illegitimate means for the attainment of his ends. The aims he has adopted are made to stand in opposition to the practice of certain virtues. Thus we contrast profits and patriotism; enriching one's self and philanthropy; getting all the law allows and justice; taking advantage of the other fellow and honesty; becoming engrossed in acquisition and love of family. Now, such contrasts obviously prove nothing more than that money-making is and would be a vicious aim if pursued regardless of these virtues, and it could well be replied that consideration of patriotism, philanthropy, love of family, etc., must in themselves impel one to earn and to save. "The love of money is the root of all evil" implies an exclusive devotion to acquisition that may well be criticized. But aside from this there is no doubt that amid the confused ideas held on the subject, aiming to make money is commonly regarded as in some sort of antagonism to the social virtues.

That there are other sides to the picture is recognized, however, even by the loose thought of the day. The man who earns his living, for instance, it views as one who in so far is performing a fundamental duty. Indeed, the world scorns him who cannot or will not support himself and his family. But this is only to say that one must work to-day to meet the expenditures of to-day. Is this the limit? Is it a virtue for him to work in order to spend, but a vice for him to work in order to save? What are the considerations to be observed by a man in deciding whether or not he should adopt money-making—that is, the acquisition of a surplus beyond his current needs—as one of his definite aims in life?

One consideration relates to our country. The United States is now understood to be spending about $25,000,000 per day in carrying on the war. In the last analysis this amount must be paid out of the past savings and the savings from current earnings of the people of the United States. The wealth of the nation consists mainly of the sum of the wealth of its citizens. We are therefore told to seek increased earnings and to economize in our expenditures in order to enhance the national wealth. The duty here is perfectly clear, but even if we did not have war conditions to teach us as a patriotic responsibility the necessity of earning and saving a surplus, the obligation would still be there....