Cowboy Songs and Other Frontier Ballads 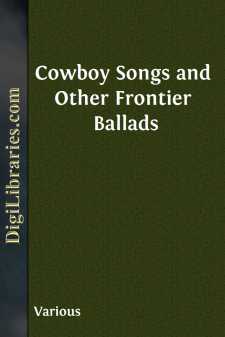 It is now four or five years since my attention was called to the collection of native American ballads from the Southwest, already begun by Professor Lomax. At that time, he seemed hardly to appreciate their full value and importance. To my colleague, Professor G.L. Kittredge, probably the most eminent authority on folk-song in America, this value and importance appeared as indubitable as it appeared to me. We heartily joined in encouraging the work, as a real contribution both to literature and to learning. The present volume is the first published result of these efforts.

The value and importance of the work seems to me double. One phase of it is perhaps too highly special ever to be popular. Whoever has begun the inexhaustibly fascinating study of popular song and literature—of the nameless poetry which vigorously lives through the centuries—must be perplexed by the necessarily conjectural opinions concerning its origin and development held by various and disputing scholars. When songs were made in times and terms which for centuries have been not living facts but facts of remote history or tradition, it is impossible to be sure quite how they begun, and by quite what means they sifted through the centuries into the forms at last securely theirs, in the final rigidity of print. In this collection of American ballads, almost if not quite uniquely, it is possible to trace the precise manner in which songs and cycles of song—obviously analogous to those surviving from older and antique times—have come into being. The facts which are still available concerning the ballads of our own Southwest are such as should go far to prove, or to disprove, many of the theories advanced concerning the laws of literature as evinced in the ballads of the old world.

Such learned matter as this, however, is not so surely within my province, who have made no technical study of literary origins, as is the other consideration which made me feel, from my first knowledge of these ballads, that they are beyond dispute valuable and important. In the ballads of the old world, it is not historical or philological considerations which most readers care for. It is the wonderful, robust vividness of their artless yet supremely true utterance; it is the natural vigor of their surgent, unsophisticated human rhythm. It is the sense, derived one can hardly explain how, that here is expression straight from the heart of humanity; that here is something like the sturdy root from which the finer, though not always more lovely, flowers of polite literature have sprung. At times when we yearn for polite grace, ballads may seem rude; at times when polite grace seems tedious, sophisticated, corrupt, or mendacious, their very rudeness refreshes us with a new sense of brimming life. To compare the songs collected by Professor Lomax with the immortalities of olden time is doubtless like comparing the literature of America with that of all Europe together. Neither he nor any of us would pretend these verses to be of supreme power and beauty....