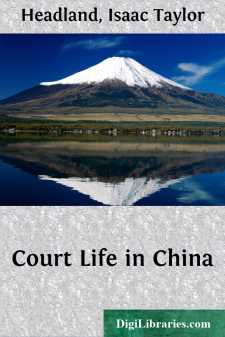 One day when one of the princesses was calling at our home in Peking, I inquired of her where the Empress Dowager was born. She gazed at me for a moment with a queer expression wreathing her features, as she finally said with just the faintest shadow of a smile: "We never talk about the early history of Her Majesty." I smiled in return and continued: "I have been told that she was born in a small house, in a narrow street inside of the east gate of the Tartar city—the gate blown up by the Japanese when they entered Peking in 1900." The princess nodded. "I have also heard that her father's name was Chao, and that he was a small military official (she nodded again) who was afterwards beheaded for some neglect of duty." To this the visitor also nodded assent.

A few days later several well-educated young Chinese ladies, daughters of one of the most distinguished scholars in Peking, were calling on my wife, and again I pursued my inquiries. "Do you know anything about the early life of the Empress Dowager?" I asked of the eldest. She hesitated a moment, with that same blank expression I had seen on the face of the princess, and then answered very deliberately,—"Yes, everybody knows, but nobody talks about it." And this is, no doubt, the reason why the early life of the greatest woman of the Mongol race, and, as some who knew her best think, the most remarkable woman of the nineteenth century, has ever been shrouded in mystery. Whether the Empress desired thus to efface all knowledge of her childhood by refusing to allow it to be talked about, I do not know, but I said to myself: "What everybody knows, I can know," and I proceeded to find out.

I discovered that she was one of a family of several brothers and sisters and born about 1834; that the financial condition of her parents was such that when a child she had to help in caring for the younger children, carrying them on her back, as girls do in China, and amusing them with such simple toys as are hawked about the streets or sold in the shops for a cash or two apiece; that she and her brothers and little sisters amused themselves with such games as blind man's buff, prisoner's base, kicking marbles and flying kites in company with the other children of their neighbourhood. During these early years she was as fond of the puppet plays, trained mice shows, bear shows, and "Punch and Judy" as she was in later years of the theatrical performances with which she entertained her visitors at the palace. She was compelled to run errands for her mother, going to the shops, as occasion required, for the daily supply of oils, onions, garlic, and other vegetables that constituted the larger portion of their food. I found out also that there is not the slightest foundation for the story that in her childhood she was sold as a slave and taken to the south of China.

The outdoor life she led, the games she played, and the work she was forced to do in the absence of household servants, gave to the little girl a well-developed body, a strong constitution and a fund of experience and information which can be obtained in no other way....