Count Ulrich of Lindburg A Tale of the Reformation in Germany 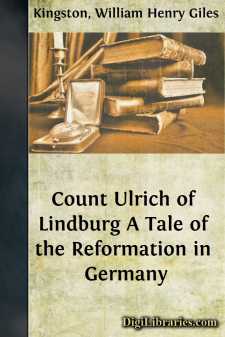 On the banks of the river Saal, in Merseburg, forming part of Saxony, at the time of which we speak, governed by the aged and excellent Elector Frederick, stood the Castle of Lindburg. It was one of those feudal piles of the Middle Ages, impregnable to the engines of ancient warfare, but which were destined to crumble before the iron shots with which cannon assailed them, as the system they represented was compelled to succumb to the light of that truth which the Gospel was then diffusing over the greater part of Europe.

Ulrich, Count von Lindburg, or the Knight of Lindburg, as he was often called, sat in a room in his Castle, with his arm resting on a table and a book before him, at which, however, his eyes seldom glanced; his looks were thoughtful and full of care. He had engaged in much hard fighting in his younger days, and now all he wished for was rest and quiet, though the state of the times gave him but little hope of enjoying them. In his own mind, too, he was troubled about many things. Four years before the time at which he is introduced to the reader, he had visited Worms, during the time the Diet, summoned by the Emperor Charles the Fifth, was sitting, and was among those who found their way into the great hall where the Emperor and the chief princes, bishops, and nobles of the land were sitting, when Dr Martin Luther, replied to the chancellor of Treves, the orator of the Diet, who demanded whether he would retract the opinions put forth in numerous books he had published and sermons he had preached.

“Since your most serene majesty and your high mightinesses require from me a clear, simple, and precise answer, I will give you one, and it is this: I cannot submit my fate either to the Pope or to the councils, because it is clear as the day that they have frequently erred and contradicted each other. Unless, therefore, I am convinced by the testimony of Scripture or by the clearest reasoning, unless I am persuaded by means of the passages I have quoted, and unless they thus render my conscience bound by the Word of God, I cannot and will not retract, for it is unsafe for a Christian to speak against his conscience.” And then, looking round on that assembly before which he stood, and which held his life in its hands, he said, “HERE I STAND, I CAN DO NO OTHER. MAY GOD HELP ME! AMEN!”

The assembly were thunderstruck. Many of the princes found it difficult to conceal their admiration; even the emperor exclaimed, “This monk speaks with an intrepid heart and unshaken courage.” Truly he did. This is the weakness of God, which is stronger than man. God had brought together these kings and these prelates publicly to confound their wisdom. These bold words had had also a deep effect on the Knight of Lindburg, and he kept meditating on them as he rode homeward towards the north. Could it, then, be possible that the lowly monk—the peasant’s son—should be right, and all those great persons, who wished to condemn him, wrong? Was that faith, in which he himself had been brought up, not the true one?...