Correspondence & Conversations of Alexis de Tocqueville with Nassau William Senior from 1834 to 1859, Volume 2 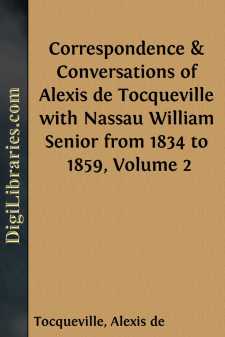 [The coup d'état took place on the 2nd, and Mr. Senior reached Paris on the 21st of December.—ED.]

Paris, December 23, 1851.—I dined with Mrs. Grot and drank tea with the Tocquevilles.

[1]'This,' said Tocqueville, 'is a new phase in our history. Every previous revolution has been made by a political party. This is the first time that the army has seized France, bound and gagged her, and laid her at the feet of its ruler.'

'Was not the 18th fructidor,' I said, 'almost a parallel case? Then, as now, there was a quarrel between the executive and the legislature. The Directory, like Louis Napoleon, dismissed the ministers, in whom the legislature had confidence, and appointed its own tools in their places, denounced the legislature to the country, and flattered and corrupted the army. The legislature tried the usual tactics of parliamentary opposition, censured the Government, and refused the supplies. The Directory prepared a coup d'état. The legislature tried to obtain a military force, and failed; they planned an impeachment of the Directory, and found the existing law insufficient. They brought forward a new law defining the responsibility of the executive, and the night after they had begun to discuss it, their halls were occupied by a military force, and the members of the opposition were seized in the room in which they had met to denounce the treason of the Directory.'

'So far,' he answered, 'the two events resemble one another. Each was a military attack on the legislature by the executive. But the Directors were the representatives of a party. The Councils and the greater part of the aristocracy, and the bourgeoisie, were Bonapartists; the lower orders were Republican, the army was merely an instrument; it conquered, not for itself, but for the Republican party.

'The 18th brumaire was nearer to this—for that ended, as this has begun, in a military tyranny. But the 18th brumaire was almost as much a civil as a military revolution. A majority in the Councils was with Bonaparte. Louis Napoleon had not a real friend in the Assembly. All the educated classes supported the 18th brumaire; all the educated classes repudiate the 2nd of December. Bonaparte's Consular Chair was sustained by all the élite of France. This man cannot obtain a decent supporter. Montalembert, Baroche, and Fould—an Ultramontane, a country lawyer, and a Jewish banker—are his most respectable associates. For a real parallel you must go back 1,800 years.'

I said that some persons, for whose judgment I had the highest respect, seemed to treat it as a contest between two conspirators, the Assembly and the President, and to think the difference between his conduct and theirs to be that he struck first.

'This,' said Tocqueville, 'I utterly deny. He, indeed, began to conspire from November 10, 1848. His direct instructions to Oudinot, and his letter to Ney, only a few months after his election, showed his determination not to submit to Parliamentary Government....