Corporal Cameron of the North West Mounted Police; a tale of the Macleod trail 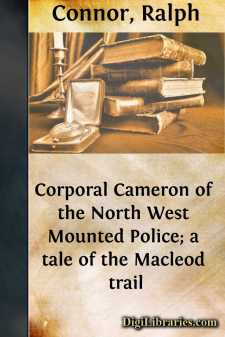 CHAPTER I THE QUITTER

"Oh-h-h-h, Cam-er-on!" Agony, reproach, entreaty, vibrated in the clear young voice that rang out over the Inverleith grounds. The Scottish line was sagging!—that line invincible in two years of International conflict, the line upon which Ireland and England had broken their pride. Sagging! And because Cameron was weakening! Cameron, the brilliant half-back, the fierce-fighting, erratic young Highlander, disciplined, steadied by the great Dunn into an instrument of Scotland's glory! Cameron going back! A hush fell on the thronged seats and packed inner-circle,—a breathless, dreadful hush of foreboding. High over the hushed silence that vibrant cry rang; and Cameron heard it. The voice he knew. It was young Rob Dunn's, the captain's young brother, whose soul knew but two passions, one for the captain and one for the half-back of the Scottish International.

And Cameron responded. The enemy's next high punt found him rock-like in steadiness. And rock-like he tossed high over his shoulders the tow-headed Welshman rushing joyously at him, and delivered his ball far down the line safe into touch. But after his kick he was observed to limp back into his place. The fierce pace of the Welsh forwards was drinking the life of the Scottish backline.

An hour; then a half; then another half, without a score. And now the final quarter was searching, searching the weak spots in their line. The final quarter it is that finds a man's history and habits; the clean of blood and of life defy its pitiless probe, but the rotten fibre yields and snaps. That momentary weakness of Cameron's like a subtle poison runs through the Scottish line; and like fluid lightning through the Welsh. It is the touch upon the trembling balance. With cries exultant with triumph, the Welsh forwards fling themselves upon the steady Scots now fighting for life rather than for victory. And under their captain's directions these fierce, victory-sniffing Welsh are delivering their attack upon the spot where he fancies he has found a yielding. In vain Cameron rallies his powers; his nerve is failing him, his strength is done. Only five minutes to play, but one minute is enough. Down upon him through a broken field, dribbling the ball and following hard like hounds on a hare, come the Welsh, the tow-head raging in front, bloody and fearsome. There is but one thing for Cameron to do; grip that tumbling ball, and, committing body and soul to fate, plunge into that line. Alas, his doom is upon him! He grips the ball, pauses a moment—only a fatal moment,—but it is enough. His plunge is too late. He loses the ball. A surge of Welshmen overwhelm him in the mud and carry the ball across. The game is won—and lost. What though the Scots, like demons suddenly released from hell, the half-back Cameron most demon-like of all, rage over the field, driving the Welshmen hither and thither at will, the gods deny them victory; it is for Wales that day!

In the retreat of their rubbing-room the gay, gallant humour which the Scots have carried with them off the field of their defeat, vanishes into gloom....