Corea or Cho-sen The Land of the Morning Calm 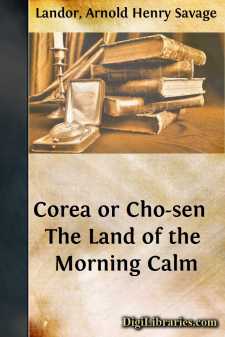 It was on a Christmas Day that I set out for Corea. The year was 1890. I had been several days at Nagasaki, waiting for the little steamer, Higo-Maru, of the Nippon Yusen Kaisha (Japan Steamship Company), which was to arrive, I think, from Vladivostock, when a message was brought to me saying that she was now in port, and would sail that afternoon for Tsushima, Goto, and the Corean ports.

I went on board, and, our vessel's anchor being raised at four o'clock, we soon steamed past Battenberg Island and got away from the picturesque Bay of Nagasaki. This was the last I saw of Japan.

The little Higo was not a bad seaboat, for, following good advice, her owners had provided her with rolling beams; but, mind you, she had by no means the steadiness of a rock, nor did she pretend to cut the water at the rate of twenty knots an hour. Still, taken all in all, she was a pretty good goer. Her captain was a Norwegian, and a jolly fellow; while the crew she carried was entirely Japanese, with the exception of the stewards in the saloon, who were two pig-tailed subjects of the Celestial Empire.

"Numbel one Clistmas dinnel has got to-night, Mastel," expostulated John Chinaman to me in his pidgen English, as I was busy making my cabin comfortable. "Soup has got, fish has got, loast tulkey has got, plan-puddy all bulning has got. All same English countly. Dlink, to-night, plenty can have, and no has to pay. Shelly can have, Boldeau can have, polt, bea, champagne, blandy, all can have, all flee!"

I must say that when I heard of the elaborate dinner to which we were to be treated by the captain, I began to feel rather glad that I had started on my journey on a Christmas Day.

There were a few Japanese passengers on board, but only one European, or rather American, besides myself, and a most pleasant companion he turned out to be. He was Mr. Clarence R. Greathouse, formerly Consul-General for the United States at Yokohama—at which place I first had the pleasure of meeting him—who was now on his way to Corea, where he had been requested by the Corean Government to accept the high and responsible position of Vice-Minister of Home Affairs, as well as of legal adviser to the King in international affairs.

Curiously enough, he had not been aware that I was to travel on the same ship, and I also never dreamt that I would have had the good fortune of being in such good and agreeable company during a voyage which otherwise would have been extremely dull. Accordingly, when we met again thus accidentally on the deck of the Higo, the event was as much to our mutual satisfaction as it was unexpected.

The sea was somewhat choppy, but notwithstanding this, when the steward appeared on the companion-way, beaming all over, in his best silk gown and jacket, and rang the dinner-bell with all his might, we gaily responded to his call and proceeded below....