Contributions to the Theory of Natural Selection A Series of Essays 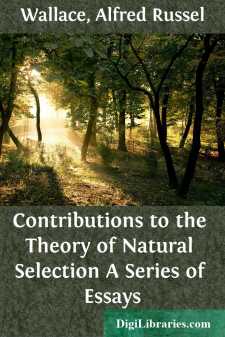 The present volume consists of essays which I have contributed to various periodicals, or read before scientific societies during the last fifteen years, with others now printed for the first time. The two first of the series are printed without alteration, because, having gained me the reputation of being an independent originator of the theory of “natural selection,” they may be considered to have some historical value. I have added to them one or two very short explanatory notes, and have given headings to subjects, to make them uniform with the rest of the book. The other essays have been carefully corrected, often considerably enlarged, and in some cases almost rewritten, so as to express more fully and more clearly the views which I hold at the present time; and as most of them originally appeared in publications which have a very limited circulation, I believe that the larger portion of this volume will be new to many of my friends and to most of my readers.

I now wish to say a few words on the reasons which have led me to publish this work. The second essay, especially when taken in connection with the first, contains an outline sketch of the theory of the origin of species (by means of what was afterwards termed by Mr. Darwin—“natural selection,”) as conceived by me before I had the least notion of the scope and nature of Mr. Darwin’s labours. They were published in a way not likely to attract the attention of any but working naturalists, and I feel sure that many who have heard of them, have never had the opportunity of ascertaining how much or how little they really contain. It therefore happens, that, while some writers give me more credit than I deserve, others may very naturally class me with Dr. Wells and Mr. Patrick Matthew, who, as Mr. Darwin has shown in the historical sketch given in the 4th and 5th Editions of the “Origin of Species,” certainly propounded the fundamental principle of “natural selection” before himself, but who made no further use of that principle, and failed to see its wide and immensely important applications.

The present work will, I venture to think, prove, that I both saw at the time the value and scope of the law which I had discovered, and have since been able to apply it to some purpose in a few original lines of investigation. But here my claims cease. I have felt all my life, and I still feel, the most sincere satisfaction that Mr. Darwin had been at work long before me, and that it was not left for me to attempt to write “The Origin of Species.” I have long since measured my own strength, and know well that it would be quite unequal to that task. Far abler men than myself may confess, that they have not that untiring patience in accumulating, and that wonderful skill in using, large masses of facts of the most varied kind,—that wide and accurate physiological knowledge,—that acuteness in devising and skill in carrying out experiments,—and that admirable style of composition, at once clear, persuasive and judicial,—qualities, which in their harmonious combination mark out Mr....