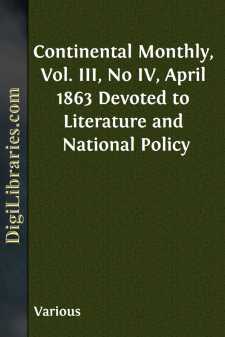 THE WONDERS OF WORDS.

Every nation has its legend of a 'golden age'—when all was young and fresh and fair—'comme les couleurs primitives de la nature'—even before the existence of this gaunt shadow of Sorrow—the shadow of ourselves—that ever stalks in company with us;—an epoch of Saturnian rule, when gods held sweet converse with men, and man primeval bounded with all the elasticity of god-given juvenility:

And even now, in spite of our atheism and our apathism, amid all the overwhelming world-influences of this great 'living Present'—the ghost of the dead Past will come rushing back upon us with its solemn voices and its infinite wailings of pity: but soft and faint it comes; for the wild jarrings of the Now almost prevent us from hearing its still, small voices. It

'Is but a dim-remembered storyOf the old time entombed.'

Besides, what is History but the story of the bygone? The elegy, too, comes to us as the last lamenting, sadly solemn swan-song of that glorious golden time. And, indeed, are not all poesies but various notes of that mighty diapason of Thought and Feeling, that has, through the ages, been singing itself in jubilee and wail?

So it is in the individual—(for is not the individual ever the rudimental, formula-like expression of that awful problem which nations and humanity itself are slowly and painfully working out?): in the 'moonlight of memory' these sorrowful mementos revisit every one of us; and

and vanitas vanitatum! are not only the satisfied croakings of blasé Childe Harolds, but our universal experience; while from childhood's gushing glee even unto manhood's sad satiety, we feel that all are nought but the phantasmagoria

'of a creatureMoving about in worlds not realized.'

Listen now to a snatch of melody:

'The rainbow comes and goes,And lovely is the rose,The moon doth with delightLook round her when the heavens are bare;Waters on a starry nightAre beautiful and fair;The sunshine is a glorious birth;But yet I know, wherever I go,That there hath passed away a glory from the earth!'

So saith the mild Braminical Wordsworth. Now it will be remembered that Wordsworth, in that glorious ode whence we extract the above, develops the Platonic idea (shall we call Platonic that which has been entertained by the wise and the feeling of all times?) of a shadowy recollection of past and eternal existence in the profundities of the Divine Heart. 'It sounds forth here a mournful remembrance of a faded world of gods and heroes—as the echoing plaint for the loss of man's original, celestial state, and paradisiacal innocence.' And then we have those transcendent lines that come to us like aromatic breezes blowing from the Spice Islands:

'Hence in a season of calm weather,Though inland far we be,Our souls have sight of that immortal sea,Which brought us hither,Can in a moment travel thither,And see the Children sport upon the shore,And hear the mighty waters rolling evermore.'

what have the golden age and Platonic dicta to do with our word-ramble? A good deal. For we will endeavor to show that words, being the very sign-manual of man's convictions, contain the elements of what may throw light on both. To essay this:

Why is it that we generally speak of death as a 'return,' or a 'return home'? And how is it that this same idea has so remarkably interwoven itself with the very warp and woof of our language and poetry?—so that in our fervency, we can sing:

Does not the very idea (not to mention the composition of the word) of a 'return' involve a previously having been in the place? And we can scarcely call that 'home' where we have never been before. So, that 'old Hebrew book' sublimely tells us that 'the spirit of the man returneth to God who gave it.'

Is it possible that these can be obscure intimations of that bygone time when WE were rocked in the bosom of the Divine consciousness? Perhaps.... And now if the reader will pardon a piece of moralizing, we would say that these expressions teach us in the most emphatic way that—'This is not our rest.' So that when we have dived into every mine of knowledge and drunk from every fountain of pleasure; when, with Dante, we arrive at the painful conclusion that

(since, indeed, the Finite can never gain entire satisfaction in itself)—we may not despair, but still the heart-throbbings, knowing that He who has—for a season—enveloped us in the mantle of this sleep-rounded life, and thrown around himself the drapery of the universe—spangling it with stars—will again take us back to his fatherly bosom.

Somewhat analogous to these, and arguing the eternity of our existence, we have such words as 'decease,' which merely imports a withdrawal; 'demise,' implying also a laying down, a removal. By the way, it is rather curious to observe the notions in the mind of mankind that have given rise to the words expressing 'death.' Thus we have the Latin word mors—allied, perhaps, to the Greek μá½ιρα and μοá¼±ρα, from μεá¼±ρομαι—to portion out, to assign....