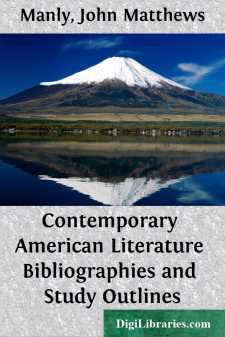 HOW TO USE THIS BOOK

This book is intended as a companion volume to Contemporary British Literature; but the differences between conditions in America and in England have made it necessary to alter somewhat the original plan.

In America today we have a few excellent writers who challenge comparison with the best of present-day England. We have many more who have been widely successful in the business of making novels, poems, plays, which cannot rank as literature at all. In choosing from such a large number a list for study, it is our hope that we have not omitted the name of any author who counts as a force in our developing literature; but, on the other hand, it is undoubtedly true that we have excluded many writers whose work compares favorably with that of some on the list. Our choice has been governed by two principles: (1) To include experimental work—work dealing with fresh materials or attempting new methods—rather than better work on familiar patterns; and (2) to represent varying tendencies in the literary effort of our country today rather than work that ranks high in popular taste. The task of doing justice to every writer is impossible; but we have been primarily concerned not with writers but with readers—those who wish guidance to the best that there is in our literature and to the signs that point to the future.

The word contemporary we have interpreted arbitrarily to mean since the beginning of the War, excluding writers who died before August, 1914, and living authors who have produced no work since then. Space limitations made it impossible to go back to the beginning of the century, and no other date since then is so significant as 1914.

The biographical material is limited to information of interest for the interpretation of work. The bibliographies are selective except in the case of the more important authors, for whom they are, for the student’s purpose, complete. The following items have usually been omitted: (1) books privately printed; (2) separate editions of works included in larger volumes; (3) unimportant or inaccessible works; (4) works not of a literary character; (5) English reprints; (6) editions other than the first. Exceptions to this plan explain themselves.

The Suggestions for Reading given in the case of the more important authors are intended for students who need and desire guidance. It is our hope that these hints and questions may lead to discussion and differences of opinion, for dissent is the guidepost to truth. As far as possible, we have avoided statement of our own opinions.

The Studies and Reviews are the meagre result of long search in periodical literature. The fact that the photograph and the personal note bulk far more largely than criticism in America needs no comment here.

Supplementary to the alphabetical list of authors with material for study, which constitutes the body of the book, are the classified indexes. These are intended for use in planning courses of study. The classification according to form suggests the limitation of work to poets, dramatists, novelists, short-story writers, essayists, critics, writers on country life, travel, and Nature, humorists, “columnists,” and writers of biography and autobiography. In this connection should be noted the supplementary list of poets whose names have not been included in our list but whose work can be studied in one or more of the anthologies indicated.

The classification according to birthplace (in some cases information could not be obtained) furnishes material for the study of local groups of writers.

The classification according to subject matter (including the use of local color and background), although it is necessarily incomplete, will, it is hoped, suggest courses of reading on these bases.

Preceding the alphabetical list of authors are bibliographies of different types, which should be of use in the finding of material: lists of indexes and critical periodicals; of general works of reference discussing the period; of collections of poems, plays, short-stories, and essays; and of bibliographies of short plays and short stories.

Our thanks for criticisms and suggestions are due to Professors Robert Herrick, Robert Morss Lovett, and Percy Holmes Boynton.

To Mr. G. Teyen, of the Chicago Public Library, we are indebted for continual help in procuring books, verifying references, and, in general, for putting the resources of the library at our disposal.