Consolations in Travel or, the Last Days of a Philosopher 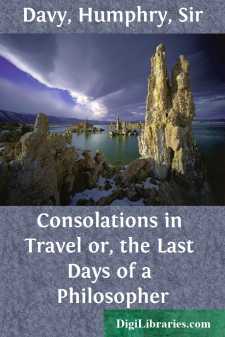 Humphry Davy was born at Penzance, in Cornwall, on the 17th of December, 1778, and died at Geneva on the 29th of May, 1829, at the age of fifty.  He was a philosopher who turned knowledge to wisdom; he was one of the foremost of our English men of science; and this book, written when he was dying, which makes Reason the companion of Faith, shows how he passed through the light of earth into the light of heaven.

His father had a small patrimony at Varfell, in Ludgvan.  His mother had lost in early childhood both her parents within a few hours of each other, and had been adopted by John Tonkin, an eminent surgeon in Penzance, to whom, therefore, so to speak, Humphry Davy became grandson by adoption.  There were five such grandchildren—Humphry, the elder of two boys, the other boy being named John, and three girls.

At a preparatory school and at the Penzance Grammar School Humphry Davy was a noticeable boy.  He read eagerly and showed great quickness of imagination, delighted in legends, when eight years old told stories to his companions, and as a boy wrote verse.  There was a Quaker saddler who made for himself an electrical machine and mechanical models, in which young Davy took keen interest, and from that saddler, Robert Dunkin, came the first impulse towards experiments in science.  At fifteen Davy was placed for further education at a school in Truro.  A year later his father died, and John Tonkin apprenticed him, on the 10th of February, 1795, to Dr. Borlase, a surgeon in large practice at Penzance.  Medical practitioners in those days dispensed their own medicines, and the inquiring mind of this young apprentice being let loose upon a store-room of chemicals, experimental chemistry became his favourite pursuit.  His grandfather, by adoption, allowed him to fit up a garret as a laboratory, notwithstanding the fears of the household that “This boy, Humphry, will blow us all into the air.”

Activity and originality of mind, with a persistent habit of inquiry and experiment, brought Davy friends who could appreciate and help him.  When Dr. Beddoes, of Bristol, was examining the Cornish coast, in 1798, he came upon young Humphry Davy, was told of researches made by him, and urged to engage him as laboratory assistant in a Pneumatic Institution that he was then establishing in Bristol.  Davy went in October, 1798, then in his twentieth year; but his good friend, and grandfather by adoption, had set his heart upon Humphry’s becoming an eminent burgeon, and even altered his will when his boy yielded to the temptation of a laboratory for research.  Men also know something of the trouble of the hen who has a chance duckling in her brood, and sees that contumacious chicken run into the water deaf to all the warnings of her love.

At Bristol Humphry Davy came into companionship with Coleridge and Southey, who were then also at the outset of their career, and there are poems of his in the Poetical Anthology then published by Southey.  But at the same time Davy contributed papers on “Heat, Light, and the Combinations of Light,” on “Phos-Oxygen and its Combinations,” and on “The Theory of Respiration,” to a volume of West Country Collections, that filled more than half the volume.  He was experimenting then on gases and on galvanism, and one day by experiment upon himself, in the breathing of carburetted hydrogen, he almost put an end to his life.

In 1799 Count Rumford was founding the Royal Institution, and its home in Albemarle Street was then bought for it.  The first lecturer appointed was in bad health, and in 1801 he was obliged to resign.  Young Davy was now known to men of science for the number and freshness of his experiments, and for the substantial value of his chemical discoveries.  It was resolved by the managers, in July, 1801, that Humphry Davy be appointed Assistant-Lecturer in Chemistry, Director of the Chemical Laboratory, and assistant-editor of the journals of the Royal Institution.  His first remuneration was a room in the house, coals and candles, and £100 a year.  Count Rumford held out the prospect of a professorship with £300 a year, and the certainty of full support in the use of the laboratory for his own private research.  His age then was twenty-three.  He at once satisfied men of science and amused people of fashion.  His energy was unbounded; there was a fascination in his personal character and manner.  He was a genial and delightful lecturer, and his inventive genius was continually finding something new.  A first suggestion of the process of photography was dropped incidentally among the records of researches that attracted more attention.  Davy had been little more than a year at the Royal Institution when he was made its Professor of Chemistry.  After another year he was made a Fellow.  Dr....