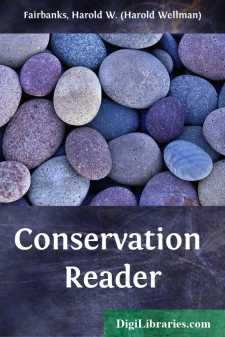 CHAPTER ONE HOW OUR FIRST ANCESTORS LIVED

Before these fields were shorn and tilledFull to the brim our rivers flowed;The melody of waters filledThe fresh and boundless woods;And torrents dashed, and rivulets play'd,The fountains spouted in the shade.

The earth is our home. It is a great treasure house filled with the most wonderful things. Although people have lived on the earth for many thousands of years, they have been very slow in learning the secrets of their treasure house. This is because early men were much like the lower animals. During all these years their minds have been slowly growing. Now we can learn and understand many things which our ancestors of long ago could not.

In habits and appearance the first men that roamed the earth were little different from the other animals except that they walked upright. When they had enough to eat and a home safe from enemies, they seemed perfectly happy and contented.

These early men lived in the same wonderful treasure house as we do, but they did not know how to make use of its riches. In truth, their wants were so few that they would have had no use for the things that now seem so necessary to us. The rich fields about them lay untilled. The gold, silver, copper, and iron in the earth remained undiscovered; and the animals and birds that we now use in so many ways then served them mainly for food.

Since they had no furry coats to keep them warm as do the animals of the cold regions, and had not learned to make clothing, their homes must have been in the warm parts of the earth. While they were without weapons to defend themselves against the lion and tiger, yet they were sharp witted and very quick in their movements and thus were usually able to escape their more powerful enemies.

Although these early ancestors of ours seemed so much like the other animals, they were in reality very different. They had the same keen senses of sight, hearing, and smell, but they were more intelligent.

The little bear cub, for example, as it grows up learns from its mother just what it should do on all occasions. It learns what its mother knows and that is all. But among the early people of whom we are speaking the children not only learned all that their parents knew, but a little more. In this way each generation of children came to know more about the world.

Thus after many years had passed people came to understand something of the wonderful world in which they lived. They were no longer at the mercy of wild animals, storms, heat, cold, hunger, and disease.

The first people, like the other animals, used only their hands and teeth in hunting and in fighting their enemies....