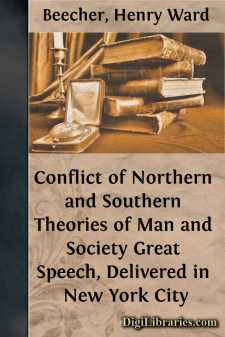 Conflict of Northern and Southern TheoriesOF MAN AND SOCIETY.

The Eighth Lecture of the Course before the Anti-Slavery Society, was delivered, January 14, 1855, at the Tabernacle, New York, by the Rev. Henry Ward Beecher. The subject, at the present time, is one of peculiar interest, as touching the questions of Slavery and Know-Nothingism, and, together with the popularity of the lecturer, drew together a house-full of auditors.

There were a number of gentlemen of distinction, occupying seats on the rostrum—among whom were the Hon. Joshua R. Giddings, James Mott, of Philadelphia, and Mr. Dudley, of Buffalo.

Mr. Beecher was introduced to the audience by Mr. Oliver Johnson, who said:

Ladies and Gentlemen: The speaker who occupied this platform on Tuesday evening last, in the course of his remarks upon the wide degeneracy of the American Clergy on the Slavery Question, reminded us that there was in a Brooklyn pulpit, a man. We thought you would be glad to see and hear such a rara avis, and therefore have besought him to come hither to-night to instruct us by his wisdom and move us by his eloquence. I trust that, whatever you may think of some other parts of the lecture of Wendell Phillips, you will, when this evening's performance is over, be ready at least to confess that in what he said of the Brooklyn preacher he was not more eulogistic than truthful.

Mr. Beecher, on presenting himself, was received with loud and hearty applause. He spoke as follows:

The questions which have provoked discussion among us for fifty years past have not been questions of fundamental principles, but of the application of principles already ascertained. Our debates have been between one way of doing a thing and another way of doing it—between living well and living better; and so through, it has been a question between good and better. We have discussed policies, not principles. In Europe, on the other hand, life-questions have agitated men. The questions of human rights, of the nature and true foundations of Government, are to-day, in Europe, where they were with our fathers in 1630.

In this respect, there is a moral dignity, and even grandeur, in the struggles, secretly or openly going on in Italy, Austria, Germany, and France, which never can belong to the mere questions of mode and manner which occupy us—boundary questions, banks, tariffs, internal improvements, currency; all very necessary but secondary topics. They touch nothing deeper than the pocket. In this respect, there would be a marked contrast between the subjects which occupy us, and the grander life-themes that dignify European thought, were it not for one subject—Slavery. That is the only question, in our day and in our community, full of vital struggles turning upon fundamental principles.

If Slavery were a plantation-question, concerning only the master and the slave, disconnected from us, and isolated—then, though we should regret it, and apply moral forces for its ultimate remedy, yet, it would be, (as are questions of the same kind in India or South America,) remote, constituting a single element in that globe of darkness of which this world is the core, and which Christianity is yet to shine through and change to light....