Confessions of a Book-Lover 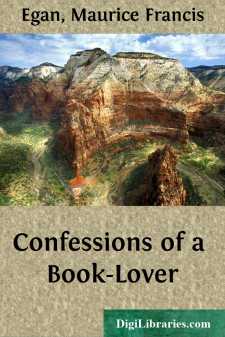 To get the best out of books, I am convinced that you must begin to love these perennial friends very early in life. It is the only way to know all their "curves," all those little shadows of expression and small lights. There is a glamour which you never see if you begin to read with a serious intention late in life, when questions of technique and grammar and mere words begin to seem too important.

Then you have become too critical to feel through all Fenimore Cooper's verbiage the real lakes and woods, or the wild fervour of romance beneath dear Sir Walter's mat of words. You lose the unreclaimable flavour of books. A friend you may irretrievably lose when you lose a friend—if you are so deadly unfortunate as to lose a friend—for even the memories of him are embittered; but no great author can ever have done anything that will make the book you love less precious to you.

The new school of pedagogical thought disapproves, I know, of miscellaneous reading, and no modern moralist will agree with Madame de Sévigné that "bad books are better than no books at all"; but Madame de Sévigné may have meant books written in a bad style, or feeble books, and not books bad in the moral sense. However, I must confess that when I was young, I read several books which I was told afterward were very bad indeed. But I did not find this out until somebody told me! The youthful mind must possess something of the quality attributed to a duck's back! I recall that once "The Confessions of Rousseau" was snatched suddenly away from me by a careful mother just as I had begun to think that Jean Jacques was a very interesting man and almost as queer as some of the people I knew. I believe that if I had been allowed to finish the book, it would have become by some mental chemical process a very edifying criticism of life.

"Tom Jones" I found in an attic and I was allowed to read it by a pious aunt, whom I was visiting, because she mixed it up with "Tom Brown of Rugby"; but I found it even more tiresome than "Eric, or Little by Little," for which I dropped it. I remember, too, that I was rather shocked by some things written in the Old Testament; and I retorted to my aunt's pronouncement that she considered "the 'Arabian Nights' a dangerous book," by saying that the Old Testament was the worst book I had ever read; but I supposed "people had put something into it when God wasn't looking." She sent me home.

At home, I was permitted to read only the New Testament. On winter Sunday afternoons, when there was nothing else to do, I became sincerely attached to the Acts of the Apostles. And I came to the conclusion that nobody could tell a short story as well as Our Lord Himself. The Centurion was one of my favourite characters. He seemed to be such a good soldier; and his plea, "Lord, I am not worthy," flashes across my mental vision every day of my life.

In the Catholic churches, a part of the Gospel is read every Sunday, and carefully interpreted. This always interested me because I knew in advance what the priest was going to read. Most of the children of my acquaintance were taught their Scriptures through the International Sunday-school lessons, and seemed to me to be submerged in the geography of Palestine and other tiresome details. For me, reading as I did, the whole of the New Testament was radiant with interest, a frankly human interest. There were many passages that I did not pretend to understand, sometimes because the English was obscure or archaic, and sometimes because my mind was not equal to it or my knowledge too small. Whatever may be the opinion of other people, mine is that the reading of the New Testament in the simplicity of childhood, with the flower of intuition not yet blighted, is one of the most beautiful of mental experiences....