Conditions in Utah Speech of Hon. Thomas Kearns of Utah, in the Senate of the United States 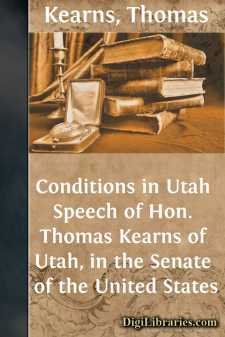 The PRESIDENT pro tempore. The Chair lays before the Senate the resolution submitted by the Senator from Idaho [Mr. DUBOIS], which will be read.

The Secretary read the resolution submitted yesterday by Mr. DUBOIS, as follows:

Mr. KEARNS. Mr. President, I will not permit this occasion to pass without saying, with brevity and such clearness as I can command, what it seems to me should be said by a Senator, under these circumstances, before leaving public life. Something is due to the State which has honored me; something is due to the record which I have endeavored to maintain honorably before the world and something, by way of information, is due to the Senate and the country.

Utah, the newest of the States, to me the best beloved of all the States, appears to be the only one concerning which there is a serious conflict with the country. I was not born in Utah, but I have spent all the years of my manhood there, and I love the Commonwealth and its people. In what I say there is malice toward none, and I hope to make it just to all. If the present day does not accept my statements and appreciate my motives, I can only trust that time will prove more gentle and that in the future those who care to revert to these remarks will know that they are animated purely by a hope to bring about a better understanding between Utah and this great nation.

Utah was admitted to statehood after, and because of, a long series of pledges exacted from the Mormon leaders, the like of which had never before been known in American history. Except for those pledges, the sentiment of the United States would never have assented to Utah's admission. Except for the belief on the part of Congress and the country that the extraordinary power which abides in that State would maintain these pledges, Utah would not have been admitted. There is every reason to believe that the President who signed the bill would have vetoed it if he had not been convinced that the pledges made would be kept.