Conception Control and Its Effects on the Individual and the Nation 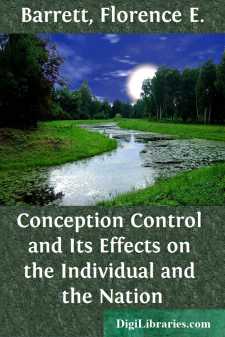 CHAPTER I THE PROBLEM OF TO-DAY

In the late seventies of last century a pamphlet entitled The Fruits of Philosophy was republished by Mrs. Annie Besant and Mr. Charles Bradlaugh, in their desire to mitigate the suffering of poor women who were overburdened by work and further weakened by frequent child-bearing. They resolved to face public obloquy and even legal prosecution in order to bring to these women knowledge of how to prevent conception, which, in their opinion, would give the relief they so sorely needed. As is well known, the later pamphlet on the same subject written by themselves was withdrawn from publication by Mrs. Besant in 1886 on religious grounds.

During the last few years the idea of the need for conception control has again become prominent, partly as a revolt against the bondage of women in child-bearing, partly accentuated by the difficulties and uncertainties of an adequate livelihood, and the desire to have a few children well educated and cared for rather than many who shift more or less for themselves.

But also the claim is made that marriage exists at least as much for the fulfilment of happiness in union with the beloved as for the procreation of children; and that it should be possible for a married pair to have the fullest gratification without fear of children unless they desire them.

Others, but these are extremists, go so far as to claim that apart altogether from marriage vows, sexual intercourse should be the experience of all, and that knowledge of how to avoid the birth of illegitimate children should be given to all.

The discussion of this subject has taken place under the title of Birth Control, but the control or regulation of births is not really the point under discussion. A very big factor in the diminution of births comes under the heading of abortions, whether voluntary or through conditions which might be remedied. That subject is not touched upon in this paper, but only methods which avoid conception, which is, of course, a very different subject from the larger one of avoiding births.

At first sight it might seem a comparatively simple thing, in view of the knowledge which already exists of the physiological processes involved in conception, to advise a method which shall prevent conception at will without harmful effect upon man or woman and yet leave intercourse unimpaired. But even at first sight it is obvious that whatever knowledge may be available, and whatever methods may be devised, it would not be easy to convey this knowledge rightly to the individual it is hoped to benefit without doing harm to others. Further thought shows that the national problems involved are so important and far reaching in effects that they might well arrest the attention of the most careless advocate of indiscriminate conception control.

This is a subject, therefore, which requires careful consideration from the point of view of the individual, of public morality, and of national welfare—and the more closely it is studied the more apparent are the far reaching issues involved....