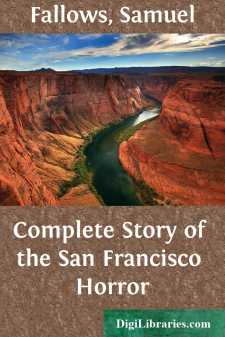 IN PRESENTING this history of the San Francisco Earthquake Horror and Conflagration to the public, the publishers can assure the reader that it is the most complete and authentic history of the great disaster published.

The publishers set out with the determination to produce a work that would leave no room for any other history on this subject, a task for which they had the best facilities and the most perfect equipment.

The question of cost was not taken into consideration. The publishers wanted the best writers, the best illustrations, the best paper, printing and binding and proceeded immediately to get them. The services of the two best historical writers in the United States were secured within an hour after the first news of the catastrophe was received. The names and historical works of Richard Linthicum and Trumbull White are known in every household in the United States where current history is read. They are the authors of many standard works, including histories of recent wars and books of permanent reference, and rank among the world’s greatest descriptive writers.

A large staff of photographers have supplied illustrations for this great historical work depicting every phase of the catastrophe from the first shock of earthquake to the final work of relief. These illustrations have special interest and value because they are made from actual photographs taken by trained and skilled photographers. This history of the most recent of the world’s great disasters is beyond all comparison the most sumptuously and completely illustrated of any publication on this subject. So numerous are the illustrations and so accurately do they portray every detail of the quake and fire that they constitute in themselves a complete, graphic and comprehensive pictorial history of the great catastrophe.

The story as told by the authors, however, is one of absorbing interest that thrills the reader with emotion and depicts the scenes of terror, destruction, misery and suffering as vividly as if the reader were an eye-witness to all the details of the stupendous disaster.

The history of the Earthquake and Fire Horror is told consecutively and systematically from beginning to end.

“The Doomed City” is a pen picture of San Francisco while its destruction was impending.

The four days of the conflagration are described each in separate chapters in such a way that the reader can follow the progress of the fire from the time of the first alarm until it was conquered by the dynamite squad of heroes.

A great amount of space has been devoted to “Thrilling Personal Experiences” and “Scenes of Death and Terror,” so that the reader has a thousand and one phases of the horror as witnessed by those who passed through the awful experience of the earthquake shock and the ordeal of the conflagration.

For purposes of comparison a chapter has been devoted to a magnificent description of San Francisco before the fire, “The City of a Hundred Hills,” the Mecca of sight-seers and pleasure loving travelers.

The descriptions of the Refuge Camps established in Golden Gate Park, the Presidio and other open spaces depict the sorrow and the suffering of the stricken people in words that appeal to the heart....