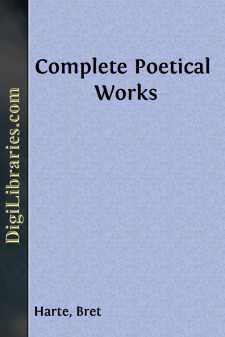 Although Bret Harte's name is identified with Californian life, it was not till he was fifteen that the author of "Plain Language from Truthful James" saw the country of his adoption. Francis Bret Harte, to give the full name which he carried till he became famous, was born at Albany, New York, August 25, 1839. He went with his widowed mother to California in 1854, and was thrown as a young man into the hurly-burly which he more than any other writer has made real to distant and later people. He was by turns a miner, school-teacher, express messenger, printer, and journalist. The types which live again in his pages are thus not only what he observed, but what he himself impersonated in his own experience.

He began trying his pen in The Golden Era of San Francisco, where he was working as a compositor; and when The Californian, edited by Charles Henry Webb, was started in 1864 as a literary newspaper, he was one of a group of brilliant young fellows—Mark Twain, Charles Warren Stoddard, Webb himself, and Prentice Mulford—who gave at once a new interest in California beside what mining and agriculture caused. Here in an early number appeared "The Ballad of the Emeu," and he contributed many poems, grave and gay, as well as prose in a great variety of form. At the same time he was appointed Secretary of the United States Branch Mint at San Francisco, holding the office till 1870.

But Bret Harte's great opportunity came when The Overland Monthly was established in 1868 by Anton Roman. This magazine was the outgrowth of the racy, exuberant literary spirit which had already found free expression in the journals named. An eager ambition to lift all the new life of the Pacific into a recognized place in the world of letters made the young men we have named put their wits together in a monthly magazine which should rival the Atlantic in Boston and Blackwood in Edinburgh. The name was easily had, and for a sign manual on the cover some one drew a grizzly bear, that formidable exemplar of Californian wildness. But the design did not quite satisfy, until Bret Harte, with a felicitous stroke, drew two parallel lines just before the feet of the halting brute. Now it was the grizzly of the wilderness drawing back before the railway of civilization, and the picture was complete as an emblem.

Bret Harte became, by the common urgency of his companions, the first editor of the Overland, and at once his own tales and poems began, and in the second number appeared "The Luck of Roaring Camp," which instantly brought him wide fame. In a few months he found himself besought for poems and articles, sketches and stories, in influential magazines, and in 1871 he turned away from the Pacific coast, and took up his residence, first in New York, afterward in Boston.

"No one," says his old friend, Mr. Stoddard, "who knows Mr. Harte, and knew the California of his day, wonders that he left it as he did. Eastern editors were crying for his work. Cities vied with one another in the offer of tempting bait....