Complete Hypnotism, Mesmerism, Mind-Reading and Spiritualism How to Hypnotize: Being an Exhaustive and Practical System of Method, Application, and Use 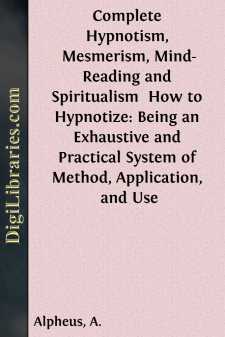 There is no doubt that hypnotism is a very old subject, though the name was not invented till 1850. In it was wrapped up the "mysteries of Isis" in Egypt thousands of years ago, and probably it was one of the weapons, if not the chief instrument of operation, of the magi mentioned in the Bible and of the "wise men" of Babylon and Egypt. "Laying on of hands" must have been a form of mesmerism, and Greek oracles of Delphi and other places seem to have been delivered by priests or priestesses who went into trances of self-induced hypnotism. It is suspected that the fakirs of India who make trees grow from dry twigs in a few minutes, or transform a rod into a serpent (as Aaron did in Bible history), operate by some form of hypnotism. The people of the East are much more subject to influences of this kind than Western peoples are, and there can be no question that the religious orgies of heathendom were merely a form of that hysteria which is so closely related to the modern phenomenon of hypnotism. Though various scientific men spoke of magnetism, and understood that there was a power of a peculiar kind which one man could exercise over another, it was not until Frederick Anton Mesmer (a doctor of Vienna) appeared in 1775 that the general public gave any special attention to the subject. In the year mentioned, Mesmer sent out a circular letter to various scientific societies or "Academies" as they are called in Europe, stating his belief that "animal magnetism" existed, and that through it one man could influence another. No attention was given his letter, except by the Academy of Berlin, which sent him an unfavorable reply.

In 1778 Mesmer was obliged for some unknown reason to leave Vienna, and went to Paris, where he was fortunate in converting to his ideas d'Eslon, the Comte d'Artois's physician, and one of the medical professors at the Faculty of Medicine. His success was very great; everybody was anxious to be magnetized, and the lucky Viennese doctor was soon obliged to call in assistants. Deleuze, the librarian at the Jardin des Plantes, who has been called the Hippocrates of magnetism, has left the following account of Mesmer's experiments:

"In the middle of a large room stood an oak tub, four or five feet in diameter and one foot deep. It was closed by a lid made in two pieces, and encased in another tub or bucket. At the bottom of the tub a number of bottles were laid in convergent rows, so that the neck of each bottle turned towards the centre. Other bottles filled with magnetized water tightly corked up were laid in divergent rows with their necks turned outwards. Several rows were thus piled up, and the apparatus was then pronounced to be at 'high pressure'. The tub was filled with water, to which were sometimes added powdered glass and iron filings. There were also some dry tubs, that is, prepared in the same manner, but without any additional water. The lid was perforated to admit of the passage of movable bent rods, which could be applied to the different parts of the patient's body....