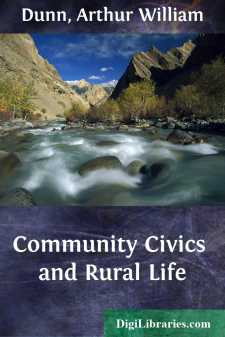 This book, like the author's earlier one, The Community and the Citizen, is a "community civics" text. Two purposes led to the preparation of this second volume. The first was to produce a text that would meet the needs of pupils and teachers who live outside of the environment of the large city. Training for citizenship in a democracy is a fundamentally identical process in all communities, whether urban or rural. But, if it really functions in the life of the citizen, this process must consist largely in deriving educational values from the actual civic situations in which he normally finds himself. Moreover, instruction that relates to matters that lie beyond immediate experience must nevertheless be interpreted in terms of that experience if it is really to have meaning. At least half of the young citizens of America live in an environment that is essentially rural. Hence their need for civics instruction that takes its point of departure in, and refers back to, a body of experience that differs in many ways from that of the urban citizen.

This does not imply that urban conditions should be ignored in the civic education of the rural citizen. On the contrary, one of the things that every citizen should be led to appreciate is the interdependence of country and city in a unified national life. In the present volume emphasis is given to this interdependence. For this reason, and because of the fundamental principles which have controlled the development of the text, it is believed that the book may perform a distinct service even in city schools.

The second purpose in undertaking the present book has been to make as obvious as possible the elements which, in the author's judgment, characterize "community civics" and give it vitality. The Community and the Citizen was a pioneer among texts that have sought to vitalize the study of government and citizenship. The term "community civics" became current only at a later time to designate the "new civics" which that book represented. It seems to the author, however, that many teachers and others have seized upon some of the more incidental, even though important, features of the "new civics" without apparently recognizing its really vital characteristics.

For example, the "new civics" performed a real service in giving emphasis to the study of the "local community," which was being sadly neglected ten or fifteen years ago. It was this emphasis, doubtless, that gave rise to the name "community civics." But "local study," even though labelled "community civics," may be, and often is, entirely lacking in vitalizing features. On the other hand, the vitalizing methods that should characterize community civics may be applied to the study of our "national community," and even of the embryonic "world community,"—and should be so applied in any "community civics" that is worthy of a place in our schools in this critical period of national and world history. The real significance of the term "community civics" is to be found in its application to an interpretation of the COMMUNITY-CHARACTER of national and international life equally with that of town or neighborhood.

Another service that community civics performed was in introducing certain elements of social or "sociological" study into grades as low as the grammar school. This has sometimes led to the description of community civics as "elementary sociology." The Community and the Citizen was perhaps the first "civics" textbook to include such "sociological" material. So far as that book is concerned, at least, the "sociological" material was included PRIMARILY to afford a viewpoint from which the better to interpret GOVERNMENT AND CITIZENSHIP. This point seems often to be missed, with the result that in some schools we find a more or less vitalized "social study" labelled "community civics," FOLLOWED BY a formal study of government that shows no obvious, organic relation to the earlier study. Whatever else "community civics" may accomplish, one of its foremost aims should be TO MAKE GOVERNMENT, INCLUDING THAT OF THE NATION, MEAN SOMETHING TO THE YOUNG CITIZEN....