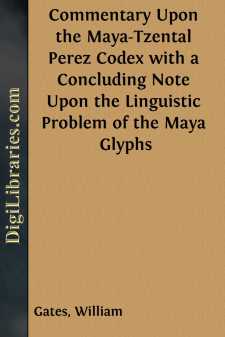 The Perez Codex was discovered just fifty years ago by Prof. Léon de Rosny, while searching through the Bibliothèque Impériale, Paris, in the hope of bringing to light some documents of interest for the then newly awakened study of Pre-Columbian America. It was found by him in a basket among a lot of old papers, black with dust and practically abandoned in a chimney corner. From a few words with the name Perez, written on a torn scrap of paper then around it but since lost, it received its name.

Being restored to its proper place in the Library, it was in 1864 photographed by order of M. Victor Duruy, Minister of Instruction, and a few copies issued without further explanatory notes than the printed wrappers. The number of copies is stated by Prof. de Rosny to have been very small; in Leclerc’s Bibl. Amér. (1878, No. 2290) it is given as only 10, and in Brasseur’s Bibl. Mex.-Guat. (page 95), as 50. A copy is in the library of the Bureau of Ethnology at Washington, and referred to in their publications as a most fortunate acquisition. I had the good fortune to secure a copy some ten years ago, and one other has recently appeared in a Leipzig catalog at a high price. Beyond these I have not traced any other copy.

In 1872 Prof. de Rosny published a reproduction, drawn by hand, which, as stated by him later, may be disregarded for practical purposes.

In 1887 he issued a facsimile edition in colors, 85 copies, which up to the present time has remained the only attempt to show the Codex in its proper colors, and has become exceedingly difficult to procure; so much so that it was only after seven years search that I was able to secure my own copy.

In 1888 he reissued the Codex, uncolored, with the same letter-press, and in an edition of 100 copies. This has also become scarce.

Each of these three editions has its advantages and disadvantages. The colored edition of 1887, having been worked over by hand, in lithography, is defective in various places, both as regards the black of the figures and glyphs, and in the colors. Coloring exists on the original codex which was not reproduced at all in the edition, and the colors given are in many cases not exact. Thus on pages 19 and 20 two different reds are used for the backgrounds, whereas but one is found in the original; on pages 15, 16 the figures are a turquoise green, and on pages 17, 18 an olive green, the correct color for all four being turquoise green.

I have been able to find no inaccuracy in the 1888 edition, which is indeed stated in the introduction to be entirely by mechanical process, without hand intervention; but being reproduced by printer’s ink in black only, not only do the colors not appear, but the chromatic values are actually far inferior to the photographs of 1864. It was stated further by Prof. de Rosny that some features of the MS. had been lost by deterioration in the 25 years previous to his editions of 1887 and 1888, but this I have not been able to verify in any important point.

The photographs and the edition of 1888 are to all general purposes identical; but, notwithstanding that the photographs are steadily yellowing by age, the chromatic values are so far superior that I have continually come to find them the court of final decision in doubtful matters. In a very considerable number of instances a close examination of the photographs has suggested the presence of faint lines of color on glyphs or figures, which was entirely indistinguishable in both of the printed editions, and which was yet in every case confirmed, although sometimes with difficulty, by the examination of the original MS.

The proved value, as well as the scarcity, of these photographs was so great, that in 1905 I had my set photographed twice, by dry and wet plate processes, and a few copies printed after a careful comparison and selection of the two sets of plates. It is from these that the present edition has grown.

The present edition, save for the photographs thus reproduced, having been entirely redrawn, and partly restored, it is fitting to detail just what has been done in this respect.

At the very beginning of my introduction to Maya studies the enormous burdens placed on research therein at every turn, bore upon me as upon every other student. The subject and its possibilities stimulate enthusiasm to the highest degree; the rewards of success are greater than those of any like problem today; and yet, fifty years since the present Codex was discovered, and thirty years since Dr....