Comic History of the United States 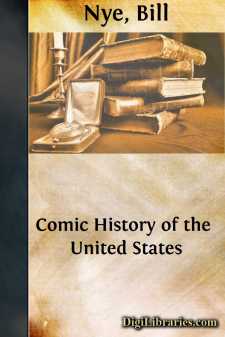 CHAPTER I. THE DISCOVERY OF AMERICA.

It was a beautiful evening at the close of a warm, luscious day in old Spain. It was such an evening as one would select for trysting purposes. The honeysuckle gave out the sweet announcement of its arrival on the summer breeze, and the bulbul sang in the dark vistas of olive-trees,—sang of his love and his hope, and of the victory he anticipated in the morrow's bulbul-fight, and the plaudits of the royal couple who would be there. The pink west paled away to the touch of twilight, and the soft zenith was sown with stars coming like celestial fire-flies on the breast of a mighty meadow.

Across the dusk, with bowed head, came a woman. Her air was one of proud humility. It was the air of royalty in the presence of an overruling power. It was Isabella. She was on her way to confession. She carried a large, beautifully-bound volume containing a memorandum of her sins for the day. Ever and anon she would refer to it, but the twilight had come on so fast that she could not read it.

Reaching the confessional, she kneeled, and, by the aid of her notes, she told off to the good Father and receptacle of the queen's trifling sins, Fernando de Talavera, how wicked she had been. When it was over and the queen had risen to go, Fernando came forth, and with a solemn obeisance said,—

"May it please your Majesty, I have to-day received a letter from my good friend the prior of the Franciscan convent of St. Mary's of Rabida in Andalusia. With your Majesty's permission, I will read it to you."

"Proceed," exclaimed Isabella, gravely, taking a piece of crochet-work from her apron and seating herself comfortably near the dim light.

"It is dated the sixth month and tenth day of the month, and reads as follows:

"This letter will be conveyed unto your hands by the bearer hereof. His name is Christopher Columbus, a native of Genoa, who has been living on me for two years. But he is a good man, devout and honest. He is willing to work, but I have nothing to do in his line. Times, as you know, are dull, and in his own profession nothing seems to be doing.

"He is by profession a discoverer. He has been successful in the work where he has had opportunities, and there has been no complaint so far on the part of those who have employed him. Everything he has ever discovered has remained that way, so he is willing to let his work show for itself.

"Should you be able to bring this to the notice of her Majesty, who is tender of heart, I would be most glad; and should her most gracious Majesty have any discovering to be done, or should she contemplate a change or desire to substitute another in the place of the present discoverer, she will do well to consider the qualifications of my friend.

The queen inquired still further regarding Columbus, and, taking the letter, asked Talavera to send him to the royal sitting-room at ten o'clock the following day.

When Columbus arose the next morning he found a note from the royal confessor, and, without waiting for breakfast, for he had almost overcome the habit of eating, he reversed his cuffs, and, taking a fresh handkerchief from his valise and putting it in his pocket so that the corners would coyly stick out a little, he was soon on his way to the palace. He carried also a small globe wrapped up in a newspaper.

The interview was encouraging until the matter of money necessary for the trip was touched upon....