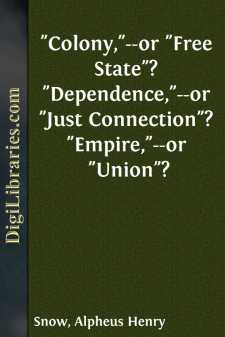 From the time of the acquisition of Porto Rico and the Philippines, in 1898, under a Treaty with Spain which left indefinite the relations between the American Union and those regions, the question of the nature of this relationship has been discussed.

The Republican party, which has been in power ever since the war, has justified its acts on the ground of political necessity. Its policy has been that of giving the people of the Islands good administration, just treatment, and all practicable self-government. The Democratic party has declared such a policy to be only imperialism and colonialism under another name. It has asserted that "no nation can endure half Republic and half Empire" and has "warned the American people that imperialism abroad will lead quickly and inevitably to despotism at home." It has characterized the Republican government in the Insular regions as an "indefinite, irresponsible, discretionary and vague absolutism," and Republican policy as a policy of "colonial exploitation." That the American people have believed the Republican administration to have been good and beneficent, is shown by their retaining that party in power. But it is perhaps not too much to say that nearly all thoughtful persons realize that some part of the Democratic complaint is just, and that there is at the present time a lack of policy toward the Insular regions, due to the inability of either of the political parties, or the Government, or the students and doctors of political science, to propound a theory of a just political relationship between us and our Insular brethren which will meet with general approbation.

We are, however, not peculiar in this respect. Great Britain, France and Germany are in the same position. In none of these countries is there any fixed theory of the relationship between the State and its annexed insular, transmarine and transterranean regions. The British Empire, so called, containing as it does several strong and civilized States in permanent relationship with Great Britain, gives many signs, to the student, of the direction in which political thought is traveling in its progress toward a correct and final theory; but at the present time there seems to be no prospect of the emergence of a final theory in that country. Here in America, political thinking, following the line of least resistance, has, as a general rule, concentrated itself upon the Constitution of the United States, as if in that instrument an answer was to be found for every political problem with which the Union may be confronted. To some of us, however, it has appeared inconsistent with the principles of the American Revolution that the Constitution of the United States should be the Constitution of any communities except the thirteen States forming the original Union and those which they have admitted into their Union; and, while yielding to none in our belief in the supremacy of the Constitution throughout the Union, we have sought to base the relationship between the Union itself and its Territories and annexed insular, transmarine and transterranean regions, upon such principles as would enable the American Union to justify itself in the eyes of all civilized nations, and as would be consistent with the ideas for which it stood at the Revolution. Those of us who thus limit the effect of the Constitution to the Union are charged with advocating an absolute power of the Union over its annexed regions. It is assumed that there is no intermediate theory between that which assumes the Constitution of the American Union to extend to these regions in some more or less partial and metaphorical way,—for it is evident upon inspection that it cannot extend in any literal way,—and that which assumes that the Union is the Government of all these regions with absolute power.