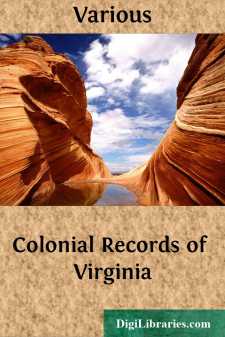 The documents herewith presented are printed from copies obtained from the Public Record Office of Great Britain. When the question of the boundary line between Maryland and Virginia was before the Legislature of the latter State, in 1860, Colonel Angus W. McDonald was sent to England to obtain the papers necessary to protect the interests of Virginia. He brought back "nine volumes of manuscripts and one book containing forty-eight maps" (see his report, Virginia Legislative Documents, No. 39, 1861,). The volumes of manuscripts contained, upon an average, 425 pages each, and were filled with valuable historical documents, of many of which no copies had ever been seen on this continent since the originals were sent from the Colony of Virginia. In a conversation with the writer, held soon after his return from England, in March, 1861, Colonel McDonald stated that having obtained copies of all the documents relating to the question of the boundary line which could be found, and having more money left of the appropriation made than was needed to pay the expenses of his return home, he decided to devote the surplus to obtaining copies of papers relating to the early history of the State, without reference to the question of the boundary line. This statement will, we presume, satisfactorily account for the presence in his collection of such papers as do not relate to the subject upon which he was engaged. That he was well qualified to select such papers is evident from an examination of the list which he made out.

During the occupation of the State capital building by the Federal troops and officials, after the surrender of the Confederate authorities in April, 1865, a very large quantity of the official documents filed in the archives of the State were removed from that building, and at the same time four of the nine volumes and the portfolio of maps above mentioned. Nothing has been heard from any of them since. In 1870, the question of the boundary line being again before the Legislature of Virginia, the Governor sent the Hon. D.C. De Jarnette upon the same errand that Colonel McDonald had so well performed, and the result was the obtaining of such papers as he could find relating to the subject under consideration, including duplicates of some of those which though useful in this connection, are included in the five volumes remaining of those collected by Col. McDonald; also, charters of great length, but which are to be found in print in the histories and statutes of the State, and many of the miscellaneous papers which Colonel McDonald had copied under the circumstances above named. Among the latter is the account of the first meeting of the Assembly at Jamestown in 1619. When Colonel McDonald visited the State Paper Office (as it was then called) in 1860, this great repository of historical materials had not been thrown open to the public, and he tells us in his report that it was "twenty days after his arrival in London before he could obtain permission to examine the archives of the State Paper Office." A year or two afterwards all of the restrictions which had existed were removed, the papers arranged chronologically, and an index made by which they could be referred to....