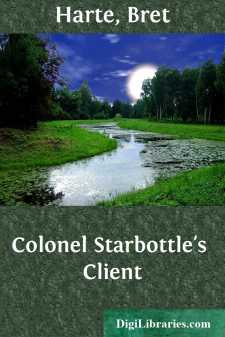 It may be remembered that it was the habit of that gallant "war-horse" of the Calaveras democracy, Colonel Starbottle, at the close of a political campaign, to return to his original profession of the Law. Perhaps it could not be called a peaceful retirement. The same fiery-tongued eloquence and full-breasted chivalry which had in turns thrilled and overawed freemen at the polls were no less fervid and embattled before a jury. Yet the Colonel was counsel for two or three pastoral Ditch companies and certain bucolic corporations, and although he managed to import into the simplest question of contract more or less abuse of opposing counsel, and occasionally mingled precedents of law with antecedents of his adversary, his legal victories were seldom complicated by bloodshed. He was only once shot at by a free-handed judge, and twice assaulted by an over-sensitive litigant. Nevertheless, it was thought merely prudent, while preparing the papers in the well known case of "The Arcadian Shepherds' Association of Tuolumne versus the Kedron Vine and Fig Tree Growers of Calaveras," that the Colonel should seek with a shotgun the seclusion of his partner's law office in the sylvan outskirts of Rough and Ready for that complete rest and serious preoccupation which Marysville could not afford.

It was an exceptionally hot day. The painted shingles of the plain wooden one-storied building in which the Colonel sat were warped and blistering in the direct rays of the fierce, untempered sun. The tin sign bearing the dazzling legend, "Starbottle and Bungstarter, Attorneys and Counselors," glowed with an insufferable light; the two pine-trees still left in the clearing around the house, ineffective as shade, seemed only to have absorbed the day-long heat through every scorched and crisp twig and fibre, to radiate it again with the pungent smell of a slowly smouldering fire; the air was motionless yet vibrating in the sunlight; on distant shallows the half-dried river was flashing and intolerable.

Seated in a wooden armchair before a table covered with books and papers, yet with that apparently haughty attitude towards it affected by gentlemen of abdominal fullness, Colonel Starbottle supported himself with one hand grasping the arm of his chair and the other vigorously plying a huge palm-leaf fan. He was perspiring freely. He had taken off his characteristic blue frock-coat, waistcoat, cravat, and collar, and, stripped only to his ruffled shirt and white drill trousers, presented the appearance from the opposite side of the table of having hastily risen to work in his nightgown. A glass with a thin sediment of sugar and lemon-peel remaining in it stood near his elbow. Suddenly a black shadow fell on the staring, uncarpeted hall. It was that of a stranger who had just entered from the noiseless dust of the deserted road. The Colonel cast a rapid glance at his sword-cane, which lay on the table.

But the stranger, although sallow and morose-looking, was evidently of pacific intent....