Cobwebs from a Library Corner 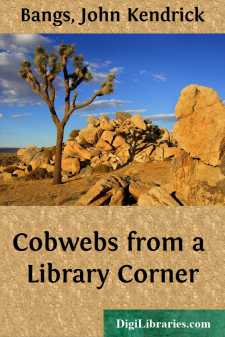 A little bit of Thackeray,

A little bit of Scott,

A modicum of Dickens just

To tangle up the plot,

A paraphrase of Marryat,

You ask me for a novel, sir,

And I say, there you are.

The pen is greater than the sword,

Of that there is no doubt.

The pen for me whene’er I wish

An enemy to rout.

Of ink with which to scrawl,

To put a foe to flight is all

But when it comes to making up

A novel in these days

You do not need a pen at all

To win the writer’s bays.

A pair of sharpened scissors and

A wealth of pure white page

Will do it if you have at hand

A pot of mucilage.

So give to me the scissors keen,

And give to me the glue,

And I will fix a novel up

That’s sure to startle you.

The good ideas have all been worked,

But while we’ve gum and paste

To please the public taste.

In my collection famed of curios

I have, as every bookman knows,

A pen that Thackeray once used.

I thought I’d “take that pen in hand,”

And see what came of it—what grand

I dipped it in the ink,

And tried to think,

“Just what shall I indite?”

And do you know, that pen went fairly mad;

A dreadful time with it I had.

It spluttered, spattered, scratched, and blotted so,

I had to give it up, you know.

It really wouldn’t work for me,

And so I put it down; but last night, after tea,

I took it up again,

And equally in vain.

I went to bed,

And in my dreams the pen came up to me and said:

“Here is the list of Asses who have tried

To take up pens the master laid aside;

Look thou!” I looked, and lo!—perhaps you’ve guessed—

My name, like Abou Ben’s, led all the rest!

My Bookworm gave a dinner to a number of his set.

I was not there—I say it to my very great regret.

For they dined well, I fancy, if the menu that I saw

Was followed as implicitly as one obeys the law.

“’Twill open,” he observed to me, “with quatrains on the half.

They go down easy; then for soup”—it really made me laugh—

“The poems of old Johnny Gay”—his words were rather rough—

“They’ll do quite well, for, after all, soup’s thin and sloppy stuff.

“For fish, old Izaak Walton; and to serve as an entrée,

I think some fixed-up morsel, say from James, or from Daudet;

The roast will be Charles Kingsley—there’s a deal of beef in him.

For sherbet, T. B. Aldrich is just suited to my whim.

“For game I’ll have Boccaccio—he’s quite the proper one;

He certainly is gamey, and a trifle underdone;

And for the salad, Addison, so fresh and crisp is he,

With just a touch of Pope to give a tang to him, you see.

“And then for cheese, Max Nordau, for I think you’ll find right there

Some things as strong and mushy as the best of Camembert;

And for dessert let Thackeray and O. Khayyám be brought,

The which completes a dinner of most wondrous richness fraught.

They’re good enough for us, I think, to casually munch;

From Avon’s vineyards in the heart of Will of Warwickshire.”

I’m in literary culture, and I’ve opened up a shop,

Where I’d like ye, gents and ladies, if you’re passing by to stop....